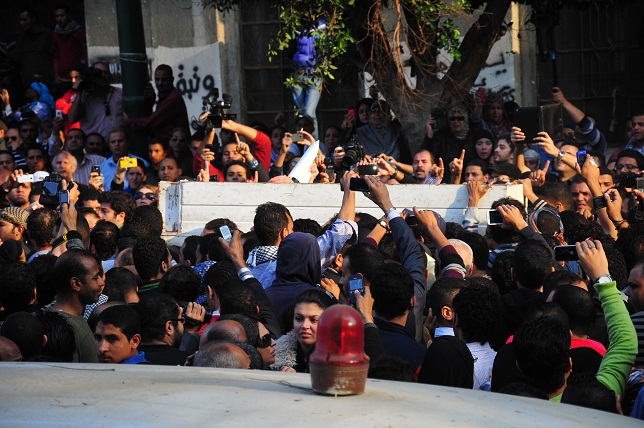 Thousands of people surrounded Omar Makram Mosque in Tahrir Square on Monday afternoon for the funeral of Gaber Salah Gaber, also known as Jika. The 16 year old died in a hospital on Sunday evening.

When Gaber’s coffin left the mosque thousands of mourners walked with his body down Mohamed Mahmoud Street. At the request of Gaber’s family, those who took part in the procession refrained from politically motivated chanting, and shouted, “there is no god but Allah. The martyr is Allah’s beloved.”

The areas around Tahrir Square, where young protesters and police had continued fighting over the past week, were calm during the funeral.

Other protesters worked to clean Mohamed Mahmoud Street, where debris had accumulated over the past days.

Volunteers formed human chains at intersections at which police were present, urging those in the procession to continue marching peacefully. At the head of the march were a large Egyptian flag and a second flag depicting Gaber.

After Gaber was laid in his final resting place and final prayers were complete, those attending the funeral marched back to Tahrir, chanting against the Ministry of Interior and President Mohamed Morsy.

“We can’t keep burying our children,” said Amina Abdallah,who attended the funeral and burial. “Their blood and our blood isn’t cheap.

“The people want the downfall of the regime,” said demonstrators as they left the cemetery. Protesters also chanted, “Sell, sell, sell the revolution Badie,” in reference to the Muslim Brotherhood’s Supreme Guide.

15 year old Islam Massoud was also buried on Monday. The teenager was killed in clashes in the northern city of Damanhour, which has seen some of Egypt’s worse violence since the president’s constitutional declaration last Thursday.

President Morsy released a statement mourning the loss of both Gaber and Massoud.

The statement urged Egyptians to protest peacefully and said that the president “mourns the loss of two of Egypt’s purest youths.”