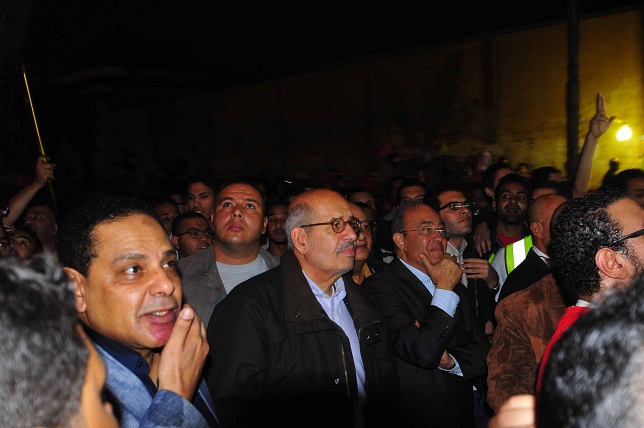 The march started from Al-Khazendar mosque, located at the beginning of Shubra neighbourhood in Cairo. It is estimated that over 10,000 Egyptians have took to the streets from this area marching to Tahrir. Award-winning novelist Alaa Al-Aswany, political analyst Amr Hamzawy, and activists from various secular political parties, including Mohamed Abul Ghar, Ziad Al Elimy, Karima Al Hefnawy, have participated.

Protesters chanted “Bread, Freedom and the fall of the Constituent Assembly,” “to the square we go, revolutionaries in millions” and “the Muslim Brotherhood cannot be trusted… down down with the guide’s regime.”

Emad Gad, ex-parliamentarian and one of the senior members of the Egyptian Democratic Social Party, told Daily News Egypt the situation in Cairo proves that the opposition to President Mohamed Morsy is not meager. “Morsy has to cancel the recent constitutional declaration to be able to reach national accord,” Gad said.

Mahmoud Ahmed, a protester and a member of the Egyptian Democratic Social Party, said all marches will exceed millions of demonstrators. “I would like to address Morsy and tell him that we are taking to the streets today against all your decisions. Our voice will come out of Tahrir.” He added that Tuesday marches are only a rehearsal to a probable massive protest if Morsy did not back off from his recent decisions.

Many demonstrations carried flags that denote their membership in parties like Al-Adl, Al-Dostour, the Free Egyptians and the Egyptian Democratic Social Party. Women were seen holding their children and chanting with protesters in balconies.

Alaa Al-Sayed, another protester, said he came to voice his opposition to Morsy and his Islamist group. “I am sure that these marches will have fruitful results, otherwise Morsy will have to step down,” Al-Sayed said. Another demonstrator Mahmoud Ismail agreed. He said, “we will stay in Tahrir until we hear the news of the cancellation of this catastrophic constitutional declaration”. If Morsy did not react to the protesters, Ismail said “we will then have to start a new revolution to kick him out of the office.”

Taher Abu Zaid, an Egyptian football player, said, “the Egyptian street is speaking today. We completely reject the constitutional declaration and the Constituent Assembly…we are here today to voice our protest to Morsy’s decisions.”

Abu Zaid said that the next step would be million man marches that call for the fall of the entire regime.

Until now, hundreds of thousands of protests are filling Tahrir Square calling for the abolishment of the constitutional declaration.