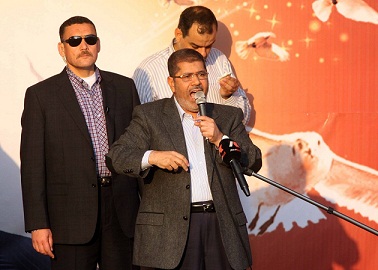 Presidential spokesperson Yasser Ali said there would be no amendments to the constitutional decree in a statement Monday night following President Mohamed Morsy meeting with the Supreme Council of the Judiciary.

Morsy said he respects and appreciates the judiciary; he assured top judges that their independence would never be compromised.  He has not offered any concessions regarding the constitutional decree, however.

The new prosecutor general Morsy installed will remain in place and courts will still not be able to dissolve either the Constituent Assembly, tasked with drafting a new constitution, or the upper house of parliament, the Shura Council.

Aly added that that protection of presidential decrees from legal review would be for “acts of sovereignty” only.

The traditional definition of “act of sovereignty” includes decisions like declaring war and changing the country’s borders. Such decisions have always been protected from judicial oversight in Egypt, raising the question of why the decree was needed.

Aly also said that reopening investigations in cases of killing protesters during the revolution mentioned in the decree, would only be in cases where new evidence appears.

It is highly unlikely that new evidence in crimes of killing protestors during the 18-day uprising of 2011 will appear. Crime scenes have since been cleaned up and the clashes happened almost two years ago.

Human rights groups have accused former regime loyalists in the police and prosecution of hiding evidence.

On Saturday there was a high turnout at the judges’ general assembly meeting, where they released a statement condemning the decree and voted for a judicial strike.

If the judges do not approve the outcome of the meeting between the president and their leaders they may opt for a vote of no confidence, although that would be a symbolic move as judges cannot be removed from office.