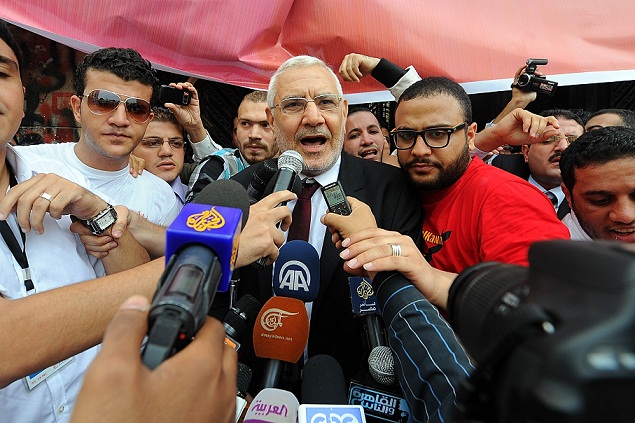 The Strong Egypt Party released an initiative on Monday night suggesting several measures the presidency and political parties can take to ease tensions caused by the constitutional declaration.

According to Mohamed Al-Mohandes, spokesperson of the Strong Egypt Party, the party is against the constitutional declaration except for two articles. The two articles are the ones related to the general prosecutor and to the retrials of those who killed or injured protesters under the former regime.

The declaration, released by President Mohamed Morsy on Thursday evening, stated in its first article that those who were accused of killing protesters will be tried under a new “Revolution Protection Law.” Article 3 saw the dismissal of the prosecutor general, Abdel-Meguid Mahmoud. Morsy appointed his replacement on the same day, Tala’at Abdallah.

The initiative calls on the president to make changes to Article 3, so that it states clear criteria for who can run as prosecutor general and so that the prosecutor general is nominated by the Supreme Judicial Council and the president only ratifies the decision. The initiative also calls for the immediate stopping of human rights violations by the police and for the reforming of the Ministry of Interior by removing police officers involved in human rights violations.

The Strong Egypt party will be participating in its own events on the streets to, “tell people about the initiative in all squares across the country,” said Al-Mohandes. Al-Mohandes said that these activities will run between Tuesday and Thursday and that the decision to hold separate activities came after the opinions of the people in the party were taken.

The Strong Egypt Party also stated in its initiative that it, “rejects the intervention of the armed forces in political matters.”

Similar to the Strong Egypt Party, the National Rescue Front (NRF), which was formed by more than 35 political groups earlier this week to resolve the crisis, said that the prosecutor general should be appointed by the Supreme Council for the Judiciary. The NRF has organised several marches this week against the declaration.

The NRF also rejects Articles 2 and 6 of the declaration. In Article 2, Morsy says that his decisions since he came to power are final and not subject to appeal. Article 6 says that the president can take the legal measures needed to counter any dangers to the revolution or the nation.