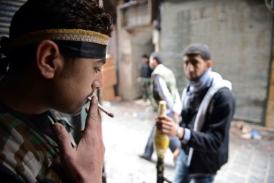 Beirut – President Bashar Al-Assad is increasingly relying on militiamen and members of the Alawite community to defend his regime as rebels advance in Syria’s north and east and inevitably towards a final showdown in Damascus, analysts say.

As the conflict becomes more drawn out, greater numbers of recruits from a massive pool of Sunni Muslims (70 per cent of the country’s population) are joining the insurgency, which enjoys the backing of Turkey and Gulf countries.

The army is facing difficulties in attracting new recruits, says Aram Nerguizian, visiting fellow at the Washington-based Centre for Strategic and International Studies.

“The regime is … working to better organise Alawite and other militias, like the shabiha, into more capable forces,” Nerguizian told AFP.

Barah Mikail, researcher at Madrid-based think tank FRIDE, says that the regime is increasingly turning for support to the Alawite community, an offshoot of Shi’a Islam, to which Assad belongs.

“The army has called on reserve troops in Alawite regions to try to avoid new defections,” said Mikail.

“Intimidating and very violent, shabiha play a paramilitary role,” the Middle East expert told AFP. “They aim at terrorising the population, to dissuade people from joining the uprising” against Assad that erupted in March last year.

Analyst Karim Bitar of the French Institute of International and Strategic Relations (IRIS) said that “for logistical and sectarian reasons, the same battalions have frequently been called up and moved from one part of the country to another since March 2011.”

The army now relies on some 120,000 experienced fighters and conscripts forced to stay on after completing their military service, according to European military experts.

“Naturally, troops’ morale is suffering, as they understand full well the fact that the regime is becoming increasingly isolated,” Bitar added.

Trained for conventional warfare, the army has focused on besieging and bombing rebel-held areas, including towns in Damascus province, where insurgents have set up rear bases.

“There seems to be a deliberate decision to try to hold terrain in northern Syria where possible, but accept strategic retreat when necessary,” analyst Nerguizian told AFP.

With more than 10,000 soldiers killed and twice as many injured, the army has shifted to a “drawn out cycle of attrition that includes the growing use of air power, but more critically the use of indirect fire and artillery, resorting to direct combat only as a last resort,” he added.

While rebels relied on hit-and-run tactics for several months of the insurgency, the tables are now turning.

Insurgents have cut off access to Aleppo, Syria’s commercial capital turned rebel heartland, and in recent days seized large swathes of the eastern province of Deir Ezzor, on the Iraqi border.

But the army still has a stranglehold on major cities, and that is its main objective, a Syrian security source told AFP on condition of anonymity.

“So far, no major cities have fallen, and we are capable of holding them,” the source said.

The regime has also kept control of the most developed parts of the country, from the south to the Alawite northwest, passing through Damascus and its province.

The army aims to take total control of Damascus and an eight-kilometre radius around it, to create the conditions necessary for dialogue in future, the source said.

For weeks, battles between rebels and troops have raged outside the capital, where insurgents have set up rear bases.

While the regime has regularly claimed to be launching its final crackdown on the rebellion in Damascus province, such announcements have rarely borne fruit.

“If it feels the pressure build up further, the regime might turn into a militia, and that would be the start of a process of disintegration in Syria,” said Bitar.

“The atmosphere and characteristics of the battle for Aleppo will likely be reproduced in Damascus” if all-out war breaks out there, he added.

“The battle for Damascus will likely be even deadlier than Aleppo, and it might change the rules of the game. It will really be an existential battle for the regime, and such battles tend to give way to all kinds of madness and excess,” said Bitar.

“If the rebels make real progress around the capital, it could be the beginning of the end for Assad,” the analyst said.

“But the regime has not said its last word, and the coming weeks are full of danger.”