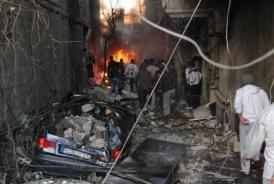 Jaramana, Syria, (AFP) – Simultaneous car bombings killed at least 38 people and left a trail of destruction in a town near Syria’s capital on Wednesday, as rebels downed a military aircraft for a second straight day.

The explosives-packed cars were detonated at daybreak in a pro-regime neighbourhood of the mainly Christian and Druze town of Jaramana, residents, state media and a rights watchdog reported.

The blasts ripped through a central square near a petrol station, sending residents fleeing in panic.

There was a ball of fire at the end of a narrow lane, and the impact of the explosions brought walls down onto cars, crushing them and scattering debris over the ground.

Pools of blood and severed body parts were on the streets, said an AFP photographer in the town.

The death toll mounted as the morning wore on, with the Syrian Observatory for Human Rights giving tallies of 20, then 29 and finally at least 38. The interior ministry put the count at 34.

“Activists and residents in the town said most of the victims were killed when a suicide attacker blew up his car, just after an explosive device was used to blow up another car,” said the UK based observatory.

Residents rushed with the dozens of wounded to hospital, or to visit the homes of bereaved families.

“What do they want from Jaramana? The town brings together people from all over Syria and welcomes everybody,” one of them told AFP.

Jarmana has now been targeted by four such bomb attacks in three months. It is home to predominantly Christians and Druze, an influential minority whose faith is an offshoot of Shiite Islam.

Sectarian divides are a key factor in Syria’s armed rebellion, with many in the Sunni Muslim majority frustrated at more than 40 years of Alawite-dominated rule.

SANA reported that “terrorists” blew up the two car bombs at the same time, as two separate explosive devices were set off without claiming any lives.

The Syrian uprising erupted in March 2011 with peaceful pro-democracy protests, inspired by the Arab Spring. It transformed into an armed insurgency when the government began a bloody crackdown on dissent.

The regime of President Bashar Al-Assad, himself from the Alawite offshoot of Shi’a Islam, insists it is fighting foreign-backed “terrorists.”

The failure of international diplomacy has enabled it to press on with its all-out military campaign to crush the rebellion, and the fighting has resulted in more than 40,000 deaths, according to the observatory.

In the latest violence, an AFP correspondent on the Syria-Turkey border reported that rebel fighters shot down a fighter jet in the embattled northwest.

The warplane came down in a massive explosion, leaving behind a plume of smoke, the journalist said, reporting several kilometres away from where the jet was downed.

The aircraft was hit by a missile and crashed at Daret Ezza, said the observatory, a watchdog that relies on a network of activists and medics on the ground for its information.

It came a day after rebels downed an army helicopter for the first time with a newly acquired ground-to-air missile, in what the observatory said had the potential to change the balance of military power in the conflict.

The gunship was on a strafing run near the besieged north western base of Sheikh Suleiman, the last garrison in government hands between Syria’s second city and the Turkish border.

Little more than a week ago, the rebels seized tanks, armoured vehicles, artillery, 120-mm mortars and rocket launchers when they took the government forces’ sprawling Base 46, about 12 km west of Aleppo.

The rebels, a mix of military defectors and armed civilians, are vastly outgunned but analysts say they are now stretching thin the capabilities of Assad’s war machine and its air supremacy by opening multiple fronts.

This was evident again on Tuesday, as rebels further tightened the noose around the key northern city of Aleppo, and violence across the country killed at least 132 people, 58 of them civilians, said the observatory.

Elsewhere on Wednesday, regime warplanes carried out five raids in 15 minutes on Maaret Al-Numan, a rebel-held town on the strategic Damascus-Aleppo highway.

Fighter jets also bombarded anti-regime town Daraya southwest of Damascus and the besieged, rebel-held neighbourhood of Khaldiyeh in the central city of Homs, dubbed by activists as “the capital of the revolution.”