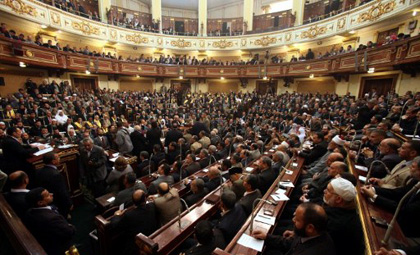 The Supreme Constitutional Court has denied claims that it was planning to dismiss President Mohamed Morsy from office.

Deputy court chairperson Maher Sami said in a Wednesday press conference that there has been a campaign against the Supreme Constitutional Court ever since it ruled to dissolve the People’s Assembly, parliament’s lower house.

He added that he was saddened to see that Morsy himself has joined this campaign.

“It is absolutely untrue that the People’s Assembly dissolution verdict came in agreement with other parties, to destroy elected institutions in a plot to overthrow the governing regime,” said Sami.

Morsy said in his speech last Thursday that there were leaks regarding the Supreme Constitutional Court’s intention to dissolve both the Constituent Assembly tasked with drafting a new constitution and the Shura Council, parliament’s upper house.

The president used this to justify his latest constitutional decree, which protects both bodies from court dissolutions.

Sami said the constitutional court repeatedly asked Morsy if he had any proof of his accusation but received no answer.

“It is also completely untrue that the court’s judges were chosen by those belonging to the previous regime and that the court would rule in its next session to remove the president from office,” he added.

The court’s statement comes as most primary courts, four out of the seven appeals courts, and the Cassation Court, the highest court in Egypt, all committed to strike until Morsy rescinds his decree.

The statement said that the court knows its jurisdictions very well and does not stray away from them and that it intends to continue with its job despite the “pain” the president’s decree has caused its members.

“The court will not be intimidated by any threats or blackmail, will not succumb to any pressures and is ready to face all such pressures even at the cost of the lives of its judges,” said Sami.

The animosity between the Muslim Brotherhood (Morsy’s patron) and the Supreme Constitutional Court started after the court dissolved the Islamist dominated lower house of parliament in June. The court was recently examining similar dissolution cases against the upper house and the Constituent Assembly.

Supporters of the president gathered at the presidential palace during his speech last Thursday and chanted for him to dissolve the Supreme Constitutional Court. He did not comment directly but said he knows there are a few corrupt judges in Egypt’s courts and that they would be dealt with.