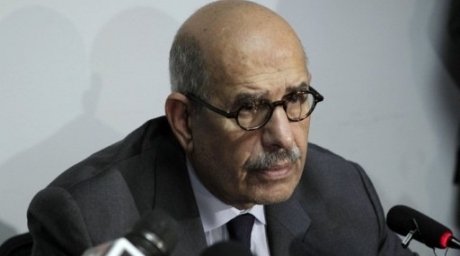 Nobel Laureate and Chairman of Al-Dostour Party Mohamed ElBaradei moved to further condemn President Mohamed Morsy’s constitutional declaration and the country’s draft constitution, which was voted on by the Constituent Assembly’s members going into Friday morning.

“[The constitution] is a contract. When a lawyer writes you a contract, he has to be clear and explicit. He has to be aware of your rights and duties,” said ElBaradei in an interview on Al-Nahar channel on Thursday night. “This assembly is not representative of Egypt. “[This constitution] will go into the dustbin of history,” he added.

ElBaradei also reiterated the opposition’s insistence that Morsy give up his powers before coming to a consensus, comparing the president’s powers to Israeli settlements, saying it was unacceptable for the president to acquire the powers and then act as if he’s open to talks. He condemned Morsy’s declaration as a unilateral action supported by neither the different factions of Egypt nor the country’s revolution, stressing that the barrier of fear put in place over the last few decades was now gone.

He repeated his point, warning that the army might intervene in the escalation of any of the crises effecting the country. He said that domestic turmoil, security, the economy, Sinai, and the Constituent Assembly were four “ticking time-bombs” working against the country.

ElBaradei added that the president could not act alone and that the opposition would continue to mount pressure if Morsy did not retreat from his constitutional declaration.

ElBaradei’s Al-Dostour Party and a wide range of other non-Islamist groups plan on continuing demonstrations into Friday.

Demonstrators staging sit-ins watched the interview on a projector screen in Tahrir Square.