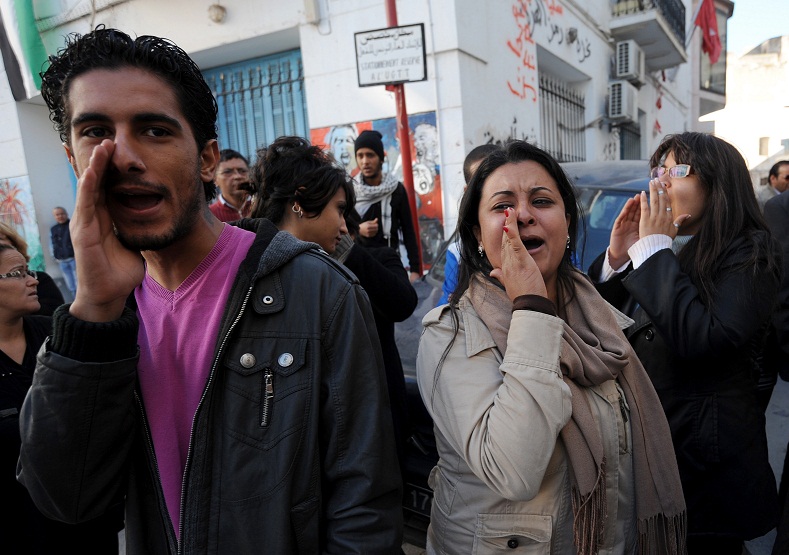 Siliana (AFP) – More than 250 people were wounded on Wednesday in a second day of clashes between Tunisian security forces and thousands of protesters in a poor southwestern town, a hospital source told AFP.

Medics at the hospital in Siliana said 265 people had been treated for bruises, fractures and cuts, some of them having been hit by birdshot.

Nineteen people were hit in the eye, and some of them transferred to a clinic in Tunis for treatment.

Several thousand protesters had turned out for a second day to call for the resignation of Ahmed Ezzine Mahjoubi, the governor of Siliana, a poor farming region 120 km south of Tunis.

But Prime Minister Hamadi Jebali insisted in a brief television appearance on Wednesday evening that “this governor is not quitting.”

The protesters were also demanding funds to boost economic development and the release of 14 people detained in unrest in April last year.

A correspondent for the TV news channel France 24, David Thomson, and his Tunisian colleague were hit by police fire, he told AFP. They were rushed to hospital but their lives were not in danger.

Tensions were stoked by rumours that some of the protesters had been killed, but hospital and police sources denied any deaths.

The emergency services in Siliana were visibly overwhelmed, as relatives of the victims gathered and vented their anger, an AFP correspondent reported.

“We will burn the town!” shouted a man whose son was among those injured.

Calm returned to the city after nightfall as security forces kept a low profile, with only few police seen on the streets.

Shops were shuttered and protesters set up barricades of burning tyres, while trade unions have called for more demonstrations on Thursday.

A group of young men also cut off the main road to Siliana to prevent the arrival of reinforcements. “We will never allow a policeman to cross here,” said 19-year-old Farid at a checkpoint 15 km from the town.

Interior ministry spokesperson Khaled Tarrouche denied a report from the official news agency TAP that all the security forces had been withdrawn from the town.

He was unable to give a casualty toll but said 16 policemen were injured and three police stations set ablaze.

“Police responded to the attacks of demonstrators against the governorate offices” and other official buildings, he told AFP.

Security forces “never attack peaceful demonstrators … The principle is always not to cause any deaths,” he said, questioned about the high number of injured demonstrators.

The protesters had gathered at 0900 GMT in front of the prefecture in Siliana for a second day of strikes and protests over poor living conditions.

“The people of Siliana most affected by poverty will never go down on their knees,” said Nejib Sebti, secretary general of Tunisia’s largest trade union, the UGTT, warning that the protesters were “ready to die for their rights.”

Investment in the Siliana region fell by 44.5 per cent from January to October, compared with the same period last year.

Much of Tunisia’s interior suffers from a chronic lack of development, and has seen growing social unrest in the face of rising discontent over the Islamist-led government’s failure to improve living standards.

The governor of Sidi Bouzid, the town in central Tunisia where the uprising began that toppled Ben Ali, was sacked in October after weeks of similar strikes and protests.

Precarious living conditions and widespread unemployment were driving factors behind Ben Ali’s overthrow in the first of the Arab Spring uprisings that have since swept the region.