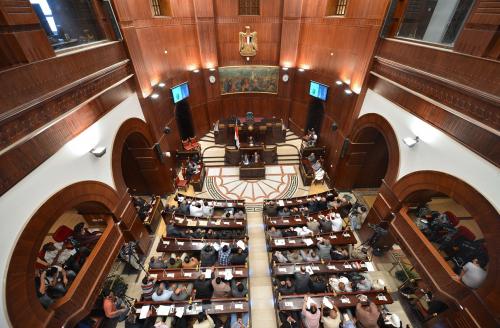 President Mohamed Morsy is scheduled to meet with members of the Constituent Assembly on Saturday evening to review and discuss the final draft of the constitution.

Assembly members have stated that recent protests, both for and against the draft, have been counter-productive as they serve only to heighten tensions between Egypt’s political factions.

On Saturday, presidential spokesman Yasser Ali said the president welcomes the continuing dialogue with all the political elements and that the presidency did not intervene in the work of the assembly or in accelerating the voting of the new draft constitution.

Ali said that the president offered two months to finish the drafting process but that the assembly made the final scheduling decision.

Assembly members themselves seemed surprised that Morsy’s constitutional declaration elicited this sort of a response because, to them, the goal of releasing the declaration in the first place was to end the political infighting in Egypt.

Nasar Fareed Wasel, a representative of Al-Azhar University, said “the draft constitution was supposed to end the hostility we’ve seen in the streets since the release of the constitutional declaration. We cannot forget that Egypt is currently consumed by political infighting that threatens to drown the country. What we need is a unified parliament that can stand behind the leadership of one man.”

Muhammad Sa’ad Al-Azhari, a Salafi member of the assembly, said that some parties have been purposefully stalling the draft process for political reasons, and therefore all new initiatives and suggestions should be rejected. He added that it was, “necessary to preserve Egypt’s legitimately elected institutions, and not to forget that the constitution is supposed to limit the powers of the president.”

In an attempt to settle the current crisis, assembly members Ayman Nur, Muhammad Mahya Al-Din and ‘Abd al-Men’am Al-Tunisi proposed that Morsy issue a new declaration that would clarify the appointment of the public prosecutor. The proposed text would read, “The Prosecutor General is to be appointed by the president, based on the deliberations of the Supreme Constitutional Court, to serve one four year term, or serve until he reaches retirement, whichever comes first.”

The group also recommended that the Shura Council in its current form maintain complete legislative authority until a new parliament is elected and that a third of the legislators should be appointed from political parties not currently represented in parliament, or be reserved for professors of law, as a means of promoting equality among Egypt’s political forces.

These three legislators stated that the new draft constitution should not be approved until all members who had previously resigned return to their posts. They believe this could be done by taking full advantage of the full two months for deliberation that were promised in Morsy’s declaration.

Nur further requested that the number of members in the constituent assembly be increased from 100 to 125, and that they include leaders of political parties not currently represented in the assembly. He also requested that any constitution agreed upon would be ruled transitional until the year 2020 and that the assembly would re-convene in a year in order to begin drafting a permanent constitution.