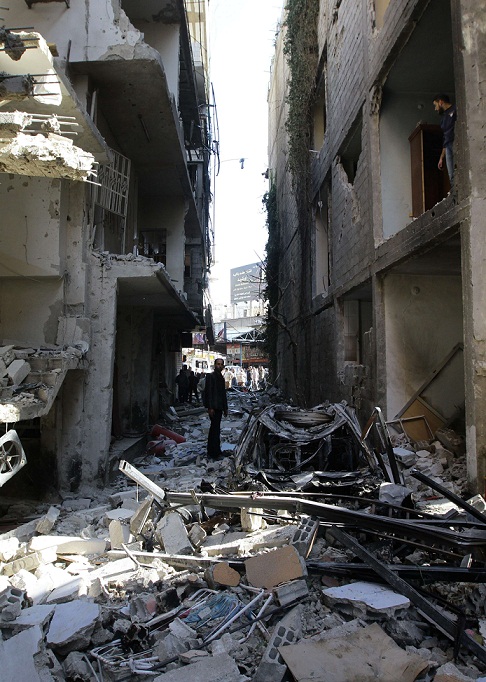 Beirut (AFP) -The Syrian army shelled the outskirts of Damascus on Saturday in a drive to establish a secure perimeter around the capital, including the key airport road that has come under sustained rebel attack.

The 27 km highway remained perilous a day after troops said they had reopened the key link to the outside world in heavy fighting that followed repeated deadly fire on a bus carrying airport staff and at least two attacks on UN convoys, a watchdog said.

The fighting sparked mounting expressions of concern from UN officials.

The army shelled both the southwestern outskirts of the capital and the town of Douma in the northeastern suburbs, human rights monitors and opposition activists said.

Douma forms part of the so-called Eastern Ghouta region where troops have gone on the offensive to secure the airport highway.

Analysts say President Bashar al-Assad’s regime has been trying to establish a secure perimeter around Damascus at all costs in a bid to be in a position to negotiate a solution to the 20-month conflict.

The repeated firing on the airport road prompted the cancellation of a string of international flights.

Airport officials said flights had resumed on Friday but a military source acknowledged more heavy fighting lay ahead to fully secure the road.

Traffic resumed after the army cleared rebels from the western side of the highway and part of the eastern side on Friday.

“But the most difficult part is yet to come,” the military official said. “The army wants to take control of the eastern side, where there are thousands of terrorists and this will take several days.”

Also, clashes were reported in the central city of Homs, dubbed by activists “the capital of the revolution”.

In the east, troops re-entered the Al-Omar oilfield, three days after pulling out, the observatory said.

“Despite Thursday’s pullout, rebels did not enter the oilfield for fear that it was mined,” said observatory director Rami Abdel Rahman.

The oilfield is one of the regime’s last positions east of the city of Deir Ezzor. Rebels last week seized a huge swathe of territory stretching from the city to the Iraqi border, the largest in Syria outside government control.

Early last month, the rebels seized control of the Al-Ward oilfield, the first it had captured. The army has since also lost control of the Al-Jofra oilfield and the Conoco gas reserves, according to the Observatory.

Syria’s oil and gas production is now largely for domestic consumption as a result of embargos on its exports by its biggest pre-conflict customers. But rebel activity has also taken a mounting toll on output.

Violence nationwide killed at least 122 people on Friday, including 73 civilians and 22 fighters from neighbouring Lebanon, the Observatory said, bringing to more than 41,000 the number killed since the uprising erupted in March 2011.

UN chief Ban predicted that Syrian refugee numbers would surge to more than 700,000 by next month as more civilians fled the fighting in residential areas, up from 480,000 now.

Peace envoy Brahimi warned the intensifying conflict could see “the state and its institutions withering away, lawlessness spreading, warlordism, banditry, narcotics, arms smuggling and worst of all the ugly face of communal and sectarian strife take hold of Syria.”

Google and Twitter said that they had reactivated a voice-tweet program, last used in 2011 when the Internet was shut down in Egypt during its revolution, to allow Syrians affected by an Internet shutdown to get messages out.

Most phones and Internet networks were down for a second straight day on Friday, the Observatory said.