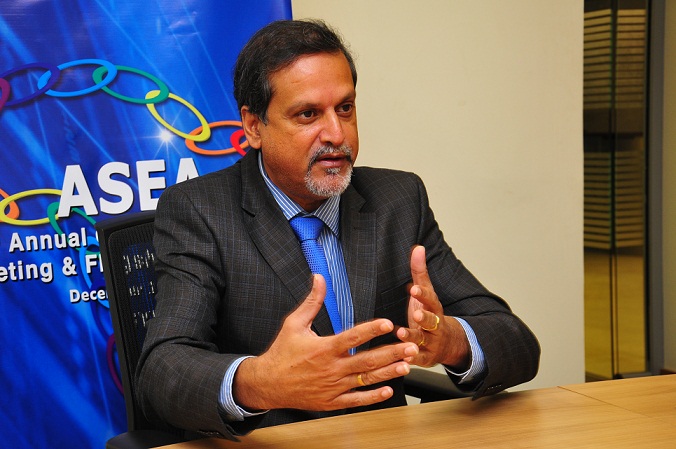 Mauritius has one of the highest GDP per capita at PPP in Africa. As the head of the Stock Exchange of Mauritius, how did your government manage to reach, and more importantly, sustain that type of growth?

It is due to a sustained a policy of diversification of the economic structure of Mauritius, moving away from what historically was in the 1970s an agricultural economy, deriving 50 per cent of its GDP from sugar, and moving into new industries like textiles, financial services and tourism, and right now Business Process Outsourcing. All this change was achieved against the background of setting the stage for the business climate to improve. We’ve been working very hard to make Mauritius an attractive investment destination in Africa. We’ve come up with business facilitation model that makes creation of new businesses very easy and very straightforward. We’re currently ranked number 19 in the world in terms of the World Bank’s Doing Business Classification, and number one in Africa.

What are the qualities that make African capital markets attractive investment destination, considering the varying degrees of corruption, social and political volatility in most African nations?

First of all, the reason why African capital markets are attracting a lot of focus from international investors is that there is a change in perception about Africa today. Africa used to be perceived as the “lost continent of the world.” But today when you look at the headlines in financial newspapers or magazines, they’re telling us that Africa is the last frontier market.

There are a number of reasons why Africa is attracting so much attention in spite of the problems of social unrest, corruption, and political volatility. There is a perception that at least some countries in Africa have realised that in order to grow, they have to open up and be market driven, that they need to tackle their problems of corruption. Of course there is a long way to go and it’s fundamental that growth in Africa is not only benefiting the top classes in society but rather an inclusive growth. They have to insure top-notch education, technology and that good governance is practiced at all levels of society.

For me, Africa is on the rise today. Some countries have taken the necessary steps to move ahead while some are lagging behind and there is a need for them to catch up. Otherwise, Africa is rising could turn into what I would call “Africa uprising.”

We have the potential, but we if we don’t get our acts together in different countries in terms of ensuring democracy and inclusive growth, education and improving our infrastructure.

Infrastructure in Africa is lagging behind and I think we’re losing a few points of growth percentage because of lack of infrastructure of communication, telecommunication, railways, roads etc. We need to improve and link our markets so as to improve inter-country trades. There is not enough trade among African countries, all the trade is between Africa and the rest of the world and the main reason for that is absence of infrastructure.

Everyone today realises the potential of investing in Africa. Now the key question for our leaders is, how to identify the obstacles and the problems?

What are the most recent developments on the Pan-African Index?

When I became the president of ASEA two years ago I started working with the executive committee on a number of initiatives to increase the visibility of African exchanges. One of the initiatives that we decided to work on was setting up and creating the Pan-African Index, choosing FTSE to create the index. We’re pleased to announce that it would be formally launched tomorrow [3 December 2012]. We’ve signed and finalised the agreement and we hope that such an index will be used by international investors to track the performance of the listed companies throughout the different exchanges in Africa. It will bring more focus and be used as a benchmark for measuring performances of investors looking at Africa.

Will the index include all ASEA members?

The index will include 19 exchanges.  South Africa will not be part of it because it is a different market; it is very big and has its own FTSE index.

Would you say the main objective of the 2012 summit of the ASEA is launching the Pan-African Index?

Regarding connecting African exchanges to one another, are there any recent developments on that front?

ASEA as an association of course supports that kind of initiative. That is to try to use technology to integrate markets and connect them. However, at the end of the day, this responsibility falls on the exchanges individually, to insure that they’re moving forward. It is not ASEA’s job to decide on behalf of exchanges. They should decide what makes sense for them in terms of the model of integration they would want to pursue.

What are the obstacles that stand in the way of implementing that type of integration?

It has to be assessed. It makes sense to link and integrate the markets, but we should figure out what are the costs that would lead to that kind of integration and measure the cost against the benefits to see whether it makes sense from a business perspective. What I can tell you is that many exchanges are talking to each other in terms of trying to crosslink through technology.

What role has the Egyptian Stock Exchange played in the promotion of ASEA?

The Egyptian exchange has played a very instrumental and fundamental role in moving the agenda of ASEA forward. All of this started in 2005, under chairmanship of Mr Maged Shawky and the vice chairmanship of Dr Mohamed Omran during those days. They really revived ASEA as an association because those days ASEA had a very timid role. Egypt took the lead in organising the ASEA conference in 2005 and took the leadership role and has contributed a lot to the growth of ASEA. They brought their own input to its development. So we’re very thankful to the Egyptian Exchange and we’re thankful that they’ve taken the lead to bring the ASEA annual meeting to Egypt again in 2012 in spite of the short notice. So the fact that in that period, they’ve been able to organise an international conference and bring the delegates from all different exchanges here to Cairo is a show of the leadership role that Dr Omran and the Egyptian Exchange is showing and the kind of interest they have for the development of ASEA.