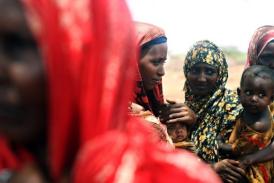 “There are many casualties, the initial reports are of 26 people killed,” said Mohamed Abdi Shire, a senior commander of the Ahlu Sunna militia in central Somalia, which controls the region.

Clashes broke out Saturday in the central Galgadud region, around the villages of Marer and Balalder, he added.

Both gunmen and civilians were reported to among those killed and wounded when fighters from the rival Saleban and Duduble clans clashed.

“We have received 18 injured people so far, three of them in a serious condition,” said Ali Dahir, a doctor at the main hospital in nearby Adadao.

Clashes are common between rival clans, especially over grazing and water for livestock.

“On behalf of the Somali government, I call upon the two clans to stop the bloodshed,” Somalia’s interior minister Abdikarim Hussein Guled told reporters in the capital Mogadishu.

Anarchic Somalia has been in chaos since the fall of President Siad Barre in 1991, and much of the country is controlled by a complex patchwork of rival militia forces.

The fighting was not connected to Somalia’s Al-Qaeda linked Shehab insurgents, whom a 17,000-strong Africa Union force, Ethiopian troops and government forces are also battling.