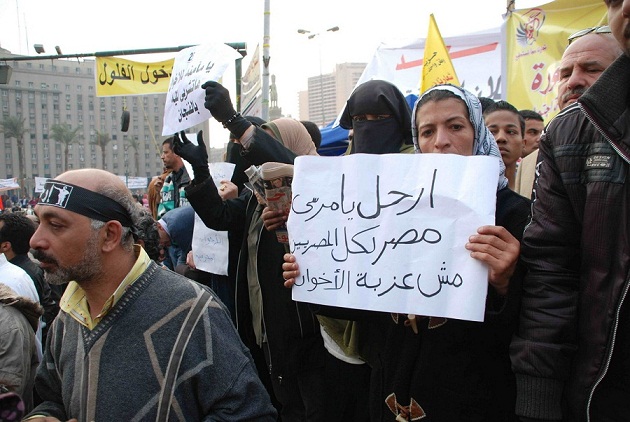 Eighteen political and revolutionary groups have announced a march to the presidential palace on Tuesday to protest against President Mohamed Morsy’s recent decisions.

The Final Warning march will oppose the Morsy’s constitutional declaration and the referendum on the draft constitution scheduled to be held on 15 December.

The statement said they rejected a referendum on the proposed constitution as it was prepared by a Constituent Assembly that lacked ”legal, political and popular legitimacy.”

“The draft that Morsy wants to hold a referendum on is actually a project to restrain the political, civil, social and political rights and freedoms of Egyptians,” the statement read. “It falsely divides the country into two camps; one with legitimacy and religion and the other against it.”

The groups also said they would continue their sit-in in Tahrir.

They added that President Morsy had failed to keep his promise to not hold a referendum on the constitution except after gaining a consensus of political groups.

They warned Morsy that his legitimacy was “wearing out.”

The Strong Egypt Party spokesman Mohamed Al-Mohandes said the referendum had to be held on 15 December according to the constitutional declaration of 19 March 2011 issued by Supreme Council of Armed Forces.

“Back then, the declaration stated that a referendum had to be held in two weeks to end the transitional period as soon as possible; now it’s just to pressure people and deprive them of any chance to really understand the draft” he said.

He added that the conflict between the presidency and the judiciary, fuelled by the recent constitutional declaration, raise questions on how the referendum will be monitored.

“In my opinion, I expect the declaration to be suspended in the last minute before the referendum” Al-Mohandes said.

Ahmed Atallah, member of the parliamentary committee of the non-Islamist Al-Wafd party said the political groups were using politics to influence people while the Brotherhood used religion. He advised those who oppose the constitution to call on religious figures to explain that democracy doesn’t contradict with shari’a.

“The people are being fooled by the government,” Atallah said. “They will vote yes and this constitution will pass”

Amr Moussa, head of the Conference party and former presidential candidate, also rejected the president’s call for a referendum. Moussa called Lamis Al-Hadidy’s live television show saying that “constitutions aren’t made like this”, and that two weeks were not enough for people to absorb and form an opinion on the constitution.

He also called for an urgent meeting of the leaders of the National Rescue Front, a coalition of several parties and movements united against the president’s latest decisions.

Moussa told talk show host Moataz Al-Demerdash that despite the two extra months the president allocated for finishing the draft, it was finalised in one night. “These two months should have been used to consult the public, unions, syndicates and universities.”

On the other hand, Freedom and Justice party spokesperson Ahmed Sobei supported the president’s decisions. “This constitution ends a transitional period and allows establishing respectable state bodies,” he said.

He added that 15 days were more than enough to read, analyse and discuss the draft constitution. “It’s only about 40 pages and a little over 230 articles,” he said.