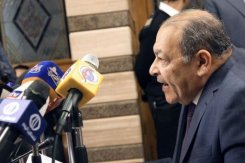 Egypt’s Supreme Constitutional Court will indefinitely postpone all of its work after judges failed to enter the building on Sunday morning. “When the court judges arrived early in the morning to attend their session, they approached the premises and found a crowd of people surrounding the court from each side, blocking the paths to the doors,” read the statement from the group of judges, led by Maher Al-Beheiry.

“The judges of the [SCC] now have no choice to declare…that they cannot directly carry out their sacred tasks under this charged atmosphere,” said the judges.

“They declare the suspension of court hearings until they are able to carry on their mission…without any psychological or physical pressures to which they are currently exposed.”

The SCC failed to convene on Sunday morning when demonstrators supporting President Mohamed Morsy surrounded the courthouse in Maadi, preventing judges from entering.

The Ministry of Interior denied that protesters were attempting to forcefully enter the courthouse. The ministry insisted the demonstrations were “peaceful,” and stated that it had secured the entrances to the building, which would have enabled the judges to enter to proceed with their work.

In its statement, the ministry claimed that it had sent reinforced security at 1 am on Sunday morning to help fortify the building, and repeated the process six hours later.

The court was scheduled to hear cases challenging the legitimacy of the Constituent Assembly and the Shura Council. The SCC controversially ruled in favour of the dissolution of parliament in June.

Approximately 5,000 pro-Morsy demonstrators arrived at the SCC building Saturday night and Sunday morning following a rally held by a number of Islamist groups in support of the president and his constitutional declaration on Saturday, reported state-owned news agency MENA.

The group chanted slogans supporting the proposed constitution, which will be put up for referendum on 15 December, and demanded that the SCC be dissolved. Many of the critics of the SCC claim its rulings have been dominated by partisan political interests.

Although the president’s constitutional declaration protects the Constituent Assembly and Shura Council from the threat of dissolution through judicial ruling, the cases challenging the two bodies of government have continued.