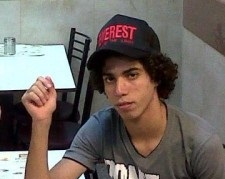 An autopsy confirmed that he died as a result of being shot in the head.

Hossam, a friend of Naguib, was at the morgue and said that the initial autopsy reported the cause of death as brain damage as a result of his skull being damaged. Hossam said that after some pressure was applied a second report was released and confirmed that Naguib died as a result of a glass marble shot to the head.

Naguib was shot last week and his brain function declined slowly thereafter. He had been reliant on a respirator.

Waleed Nada, a member of We Care about Human Beings group that were following Naguib’s case said, “during the week his condition declined and there were indications that he was dead but the machines were keeping him alive.”

Nada, who said he spoke to Naguib’s brother in the hospital, said “Ahmed was just a regular guy from a regular family.”

Earlier on Sunday there were fears that the post-mortem would be carried out without a lawyer present. Hossam said his lawyer had confirmed that the morgue report was correct. The family sought confirmation from an independent doctor to be sure.

Dr Eida Seif El Dowla from the El Nadeem centre, who is also following the case, explained, “ever since the revolution there is a tradition that every post-mortem that is carried out must have present a lawyer and a doctor that is not affiliated with the government to ensure the report is correct.”

A memorial service was held at Omar Makram Mosque in Tahrir Square at 5pm on Sunday.

Naguib is the fourth death in the latest clashes sweeping the country as a result of the latest presidential declaration.