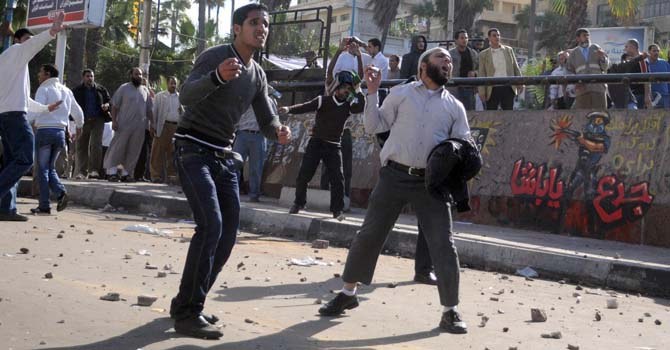 Two students were arrested in Alexandria on Monday following a fight between members of the 6 April Youth Movement and Muslim Brotherhood members.

Mohamed Adel, one of the leaders of 6 April reported, “around 200 6 April students were protesting against the draft constitution and President Mohamed Morsy’s declaration at Alexandria University and were attacked by students from the Muslim Brotherhood.” He added, “the Brotherhood students began beating the protestors and they were waving banners with religions slogans and threatening messages directed at the 6 April group.”

Following the scuffle, Amr Khaled and Mahmoud Talaat who are members of the 6 April movement were arrested by police.

Spokesperson for the Brotherhood, Mahmoud Ghozlan, said, “this is ridiculous, the Muslim Brotherhood does not harm people.” He added, “as you know our headquarters are being attacked all over the country.”

This incident has come at a time when tensions are building between the pro and anti-Morsy camps in Alexandria.

Ten days ago the Freedom and Justice Party headquarters in Alexandria were burnt down by protesters and since then, the two groups have made efforts to reduce the possibility of clashes by protesting in different places.

Despite this, clashes have still occurred in the costal Mediterranean city. Last Friday, a group of protesters opposing Morsy claimed they were attacked by men wielding machetes.

This wave of unrest was prompted by Morsy’s constitutional declaration which many view as an attempt to reduce the power of Egypt’s judiciary.