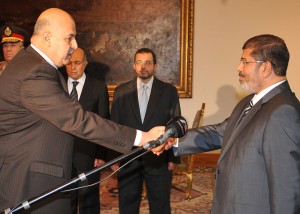 Vice-President Mahmoud Mekki said President Mohamed Morsy would not use his constitutional declaration, as it relates to the judiciary, to disrupt the referendum scheduled for 15 December.

In an interview with Egyptian state television on Sunday evening, the vice-president claimed that Morsy had no plans to rescind the current constitution or issue any additional declarations.

Mekki stated that if the proposed constitution should be passed in the 15 December referendum, he would return to his duties as a judge because the role of a vice-president is not stipulated.

He also said that Morsy’s controversial constitutional declaration would potentially be void after 13 days if the referendum resulted in the constitution being ratified.

Mekki asserted that the constitutional declaration was intended to prevent the judiciary from making politically motivated rulings. He sympathised with colleagues in the judicial branch who expressed concern that the decree negatively impacted the judiciary’s independence. “The anger is justified, but it is unjustified for judges to engage in political work and go beyond the limits of declaring anger,” he said. Mekki affirmed that despite the anger expressed by some judges, the president had repeatedly expressed his interest in preserving the judiciary’s independence and doesn’t want it to be used merely as a campaign against state institutions.

The vice-president expressed his confidence in Morsy taking on his additional powers with “sincerity,” pointing to his wise use of legislative powers after parliament was dissolved.

He insisted that most of the text of the constitution was agreed upon before any withdrawals and recommended that if the opposition wanted to amend the constitution, it would be necessary to focus on parliamentary elections, which would put them in a position allowing them to do so.