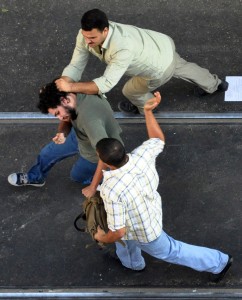 Two other members of the National Council for Human Rights (NCHR) have resigned, bringing the total number of resignations in a week to four.

“Remaining in the NCHR has become impossible,” Hammad and Khalil said in their joint, written resignation, “improving human rights conditions is not possible under such circumstances, especially if the human rights breaches come from the president.”

The circumstances they refer to follow President Mohamed Morsy’s constitutional declaration, and the proposed constitution. According to Hammad and Khalil, the Constituent Assembly “unjustifiably hastened” the drafting of the constitution to finalise it on Thursday. Morsy has since announced a referendum on the constitution, scheduled for 15 December.

The Supreme Constitutional Court (SCC) was scheduled to look into a case challenging the constitutionality of the Constituent Assembly on Sunday, but Islamist rallies surrounded the court and prevented the judges from meeting; the case was therefore postponed.

“This entire atmosphere is quite alarming,” Hammad said, adding that the governing Freedom and Justice Party refuses any dialogue with other parties and that this attitude is common to everybody who belongs to the party “from the president to the most insignificant party-member.”

Hammad also referred to a number of concerns arising from the Muslim Brotherhood’s actions, which warn of a crack-down on rights such as freedom of opinion, freedom of expression, thought and belief, women’s and minorities’ freedoms and social and economic freedoms.

“The performance of the NCHR has so far been factious and lacking,” Khalil said, adding that the council failed in its fist test; that is, taking a stance against Morsy’s constitutional declaration for breaching human rights. “The president broke his promise to the people; he had promised not to put the constitution up to a popular referendum before people reach agreement over its articles.”

The glut of resignations started last Wednesday, following an emergency NCHR meeting to discuss Morsy’s constitutional declaration. Most council members without an Islamist background were disappointed with the resultant statement. At least seven of the 20 members appointed in September are from an Islamist background.

The council denounced Morsy’s “breach of authority” in Article 2 of his declaration, and demanded an explanation. It also stated that Article 6 was “unnecessary.”