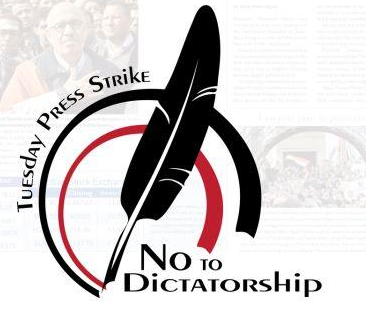 The decision to blackout came after The National Committee for Defending Freedom of Opinion and Expression held a meeting on Thursday to discuss Morsy’s constitutional declaration and articles relating to the rights of journalists in the new draft constitution.

Chief editors of several newspapers and representatives from TV channels attended the meeting.

Many journalists and media anchors criticised articles related to media in the draft constitution, saying that it limits the rights of journalists, subjecting them to imprisonment.

On Monday, Al-Tahrir, Al-Youm El-Sabie, Al-Watan and Al-Wafd shared the same title and photo on their front pages. The titles of the front pages read “No to Dictatorship” and showed a photo of a chained prisoner sitting inside a cell, representing the situation of journalism in Egypt.

President Morsy has set 15 December as the date for the referendum on the draft constitution, which has been criticised by civil groups and judges, as well as journalists and media anchors.

Morsy also issued a constitutional declaration, immunizing the Constituent Assembly, Shura Council and his decisions against the judicial authority.