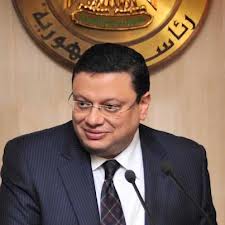 Presidential spokesperson Yasser Ali said in a press conference Monday confirmed that the current draft constitution does not include  the position of a vice-president.
“The new constitution limits the authorities of the president while increasing those of the Prime Minister, thus there is no need to have a vice-president,” explained Ali.
Current VP Mahmoud Mekki is not expected to continue in his position.
Commenting on the current row between Morsy and the judges, Ali said, “judicial authority is respected by all. The president has been detained before for seven months because he once defended the judiciary.”
He also assured that the public referendum on the constitution, set on December 15, will be supervised by judges. “We never considered any alternative to the Judiciary for the constitutional referendum.”
As for the protests taking place in front of the Supreme Constitutional Court, Ali said the presidency  “dislikes disrupting work in courts”.
Although demonstrations by courts have recently become common, “not one judge was prevented from reach his court,” Ali said assuring that the three judges who arrived at the Supreme Constitutional Court on Monday morning were “protected by the head of security forces and his deputy,” negating reports of the judegs’ inability to enter the court which lead to the postponement of the verdict on the dissolution of the constituent assembly and the Shura council.
Topics: constitution egypt news