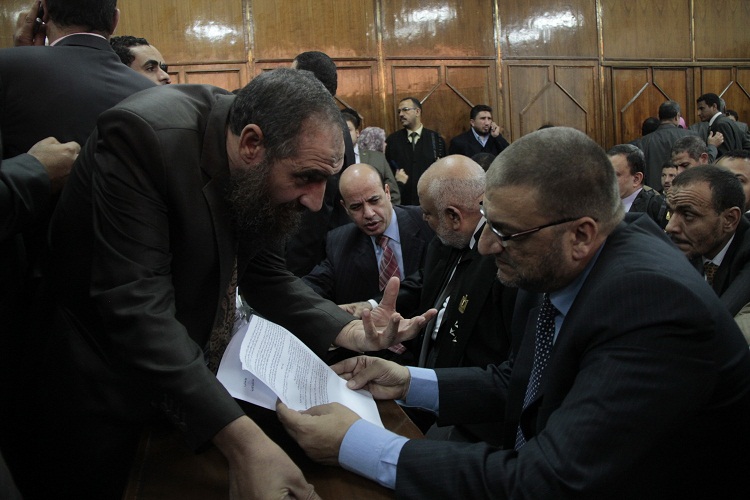 Judge Farid Tanagho had to adjourn a Tuesday court session three times as Muslim Brotherhood supporters interrupted proceedings with chants for President Mohamed Morsy and against his detractors.

The Administrative Judiciary Court at the State Council postponed cases calling for the cancellation of Morsy’s 22 November constitutional decree and his call for a 15 December referendum on the draft constitution to Wednesday 5 December.

Supporters of the president filled the court hall, repeatedly interrupting plaintiff lawyers and chanting against the opposition and occasionally the judicial bench as well.

“Oh what a shame, the [remnants of the previous regime] are now revolutionaries,” chanted Morsy’s supporters as Muslim Brotherhood lawyers spoke over the plaintiffs, forcing Tanagho to adjourn five minutes into the session.

When the trial resumed after 30 minutes, plaintiff Shehata Mohamed Shehata argued that the president does not have the right to issue constitutional decrees, a power he said was reserved only for “founding authorities such as the Supreme Council of the Armed Forces.”

The president, Shehata said, was an executive authority and as such could not issue constitutional decrees.

Muslim Brotherhood lawyer Abdel Moniem Abdel Maqsoud demanded the bench recuse “since the court already expressed its opinion on the decree in public.”

The State Council, among several other judicial bodies such as the Cassation Court and Supreme Constitutional Court have all announced their rejection of Morsy’s decree.

The court adjourned the session again for deliberation while lawyers and supporters on both sides stood on benches exchanging chants and insults.

“Down with the Supreme Guide’s rule,” chanted opposition lawyers while Morsy supporters shouted back, “power, will, faith, Morsy is firing on all cylinders.”

Police forces in the hall finally interfered, separating both sides and getting everyone to stop standing on benches before forming two lines on either side of the hall’s middle pathway to block anyone from standing there.

The judges returned for a second time and postponed both sets of cases to the next day, for plaintiffs and the defence to hand in files and memos and also to consider the Brotherhood’s recusal request.

Morsy’s 22 November constitutional decree gave him sweeping new powers including the protection of the Constituent Assembly tasked with drafting the new constitution and the Shura Council, parliament’s upper house, from court dissolutions.

The decree also says that all of Morsy’s decisions cannot be challenged in the courts but he later said that provision would only apply to “sovereign acts.”

The State Council was among many judicial bodies to reject the decree and announce a strike. It said it would close down all its courts except the first district of the Administrative Judiciary Court, as it would be responsible for handling cases against the decree.