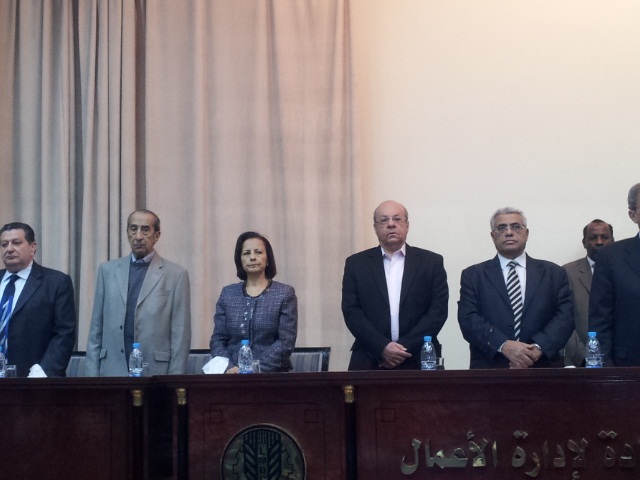 Former members of the Constituent Assembly say that administrative issues within the assembly were part of the reason they had to leave.

In a Tuesday conference they explained why they withdrew from the assembly and how they feel about the draft constitution. Among the speakers at the conference were Hamdi Qandil, Hassan Naf’e, and Salah Fadl who were all part of the 10 member technical advisory committee.

Amr Moussa, former presidential candidate, started the conference by explaining that his decision to withdraw from the assembly was not a political decision but it was caused by disagreements over certain texts in the constitution and administration problems. Many speakers shared the same feelings, saying that some articles were changed after consensus had been reached.

Hassan Naf’e, spoke about the problems he faced working in the technical advisory committee. He said that eight out of 10 of the advisory committee decided to withdraw because the committee’s position is not the same as the position of political parties, which make ideological calculations.

“Despite the different schools of thought, we discussed each article and managed to reach phrasing which we all approved of…” Naf’e said. He also said they were handed a new draft almost every day and they did not know who was making those changes.

Naf’e said that the final decision on the content was actually made by a handful of people.

Waheed Abdel-Meguid, who was the spokesperson of the assembly, said things were going well in until mid-September when it became obvious that the People’s Assembly would not be reinstated. Abdel-Meguid said that at that point, it turned into an election campaign by a few groups.

Some experts criticised the draft. Soad Kamel spoke about the economic and social rights addressed in the constitution and said that generally the phrasing of some articles related to these rights is fluid and unregulated.  Kamel specifically mentioned Article 33, one of the most controversial articles. It states that all citizens are equal before the law and equal in terms of rights and duties and there is no discrimination between them. “The part that says that there will be no discrimination based on sex, ethnicity, language, or religion was removed,” Kamel said.

Suzy Adly also spoke about women and children. She criticised Article 73 of the draft, which fails to ban human trafficking and was concerned that the draft does not address child labour.

Finally, Mohamed Abdel-Qader, head of the Farmers’ Syndicate, said that the only commitment he wanted from the state was the provision of arable land. “How are we going to eat?” he cried.

Abdel-Qader said that during discussions in the first four and a half months he thought the constitution would be really good, but what was drafted turned out to be different from what was discussed.