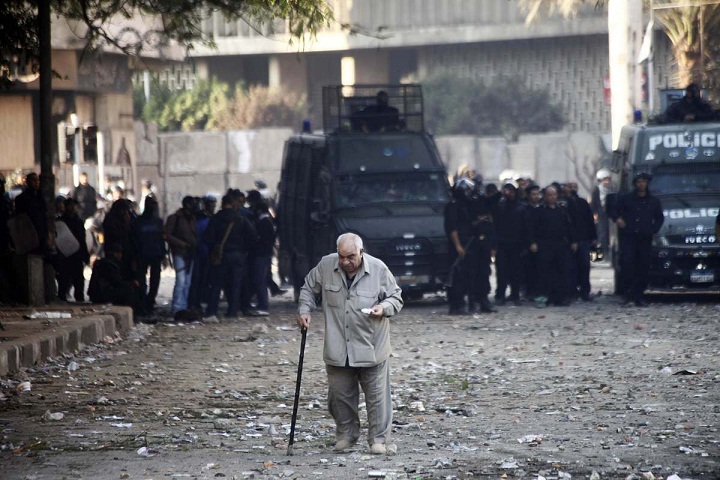 With protesters marching from Tahrir square to the presidential palace on Tuesday night, Daily News Egypt takes a look at the international reaction to President Mohamed Morsy’s declaration and the draft constitution.

Omar Ashour, Director of Middle East Graduate Studies at Exeter University analyses Morsy’s position following his decree. In an article entitled “Egypt’s Democratic Dictator?” Ashour states “Morsy has thus been put in the odd position of having to defend his decision against the protesters while simultaneously making common cause with them.”

Ashour believes, “while many Egyptian may support Mosry’s aims, a dramatic expansion of presidential power in order to attain them was, for many, a step too far.” He adds that the opposition, despite the divisions between the different groups, are united in the idea that “the price of cleansing the judiciary was too high, arguing that the constitutional declaration will lead to dictatorship.”

He points out that while the opposition are calling for the use of democratic principles to be employed, some groups are themselves “not adhering to democratic principles, either.” He believes that some desire to oust Morsy altogether rather than just forcing him to retract his decree.

Ashour believes that at the end of the crisis it will be the security sector that emerges as the winner. He states, “it will enforce the rule of law, but only for a price.” He warns, “this constitutes a much more serious and lasting threat to Egypt’s democratisation than do Morsy’s temporary decrees.”

William Partlett, writing for the Brookings Institution says “Egypt’s constitutional debate has deep roots in constitutional theory.” He believes that the stance of both sides reflect two different methods of “constitution-making.”

Morsy and his supporters favour a “popular constitution-making” whilst the opposition and the courts object to the constitution being “the product of a bare majority,” but favour “a more consensual and deliberative process that involves participation through pre-existing institutions and law.”

Partlett believes that examples from the past have proved the opposition and courts’ preferred method has “been far more successful in building a stable constitutional democracy.” He points out this was achieved through the “use of deliberative roundtables, pre-existing law and judicial supervision to ensure an inclusive approach to constitution-making.”

On the effect Morsy’s decree will have on the constitution Partlett says, “this decision… threatens not only to make the new Egyptian constitution a divisive document but also to exclude and undermine a key institutional player in the implementation of this document: the courts.”

Media outlet Der Spiegel rounded up the views on Egypt’s current situation from across the German political spectrum.

The German media is sympathetic to both sides; the general view is that “while the Muslim Brotherhood’s undermining of the pre-revolutionary judiciary is understandable, so are the protests against the Brotherhood’s own actions.”

Die Welt, a conservative daily, highlights Egypt’s importance in the region and believes that “what moves Egypt today moves the region tomorrow and the shockwaves could very well spark fear and terror among the Europeans.” It added “the future of Egypt will indicate for the whole of the Islamic world whether democracy and a Quran-based life can be reconciled.