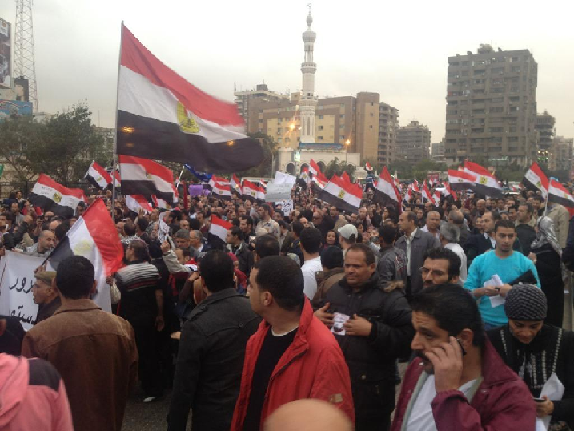 As the sun set in Cairo, tens of thousands of protesters massed against neat rows of state security officers on 4 December in Heliopolis. The officers were part of a contingent blocking roads in the upscale Cairo neighbourhood, which hosts the destination of the protesters’ marches: the presidential palace.

Marches left Ain Shams, Matarya, and Hegaz Square and convened at Raba’a Al-Adaweya. From there they continued to Al-Tayaran Street and Salah Salem Street where they met marches from Al-Fatah Mosque and Al-Nour Mosque.

“We’re going to the presidential palace so he pays attention to us,” said Khaled Abdelsalem, who held a sign No Military Trials in the Raba’a Al-Adaweya march. Abdelsalem said President Mohamed Morsy keeps ignoring the opposition, instead only listening to his own supporters as they gather in Heliopolis and outside Cairo University. “We’re going to the palace so there is no way he can ignore us.”

The Nasr City march had heavy representation from Hamdeen Sabahy’s Popular Current. The protesters chanted “bread, freedom, and cessation of the Constituent Assembly,” as they waved Egyptian flags and a banner with the image of Gaber Saleh Gaber, a young man killed in recent protests.

The marchers levelled accusations of illegitimacy at the Muslim Brotherhood’s supreme leader, President Morsy and the upcoming referendum.

Ahmed Mayel, who held a sign that reading “no to the constitution,” said, “the president keeps saying ‘they’re a minority, they’re a minority.’ Well, we’re going to show him how big this minority is. We’re going somewhere where he’ll hear our voices.”