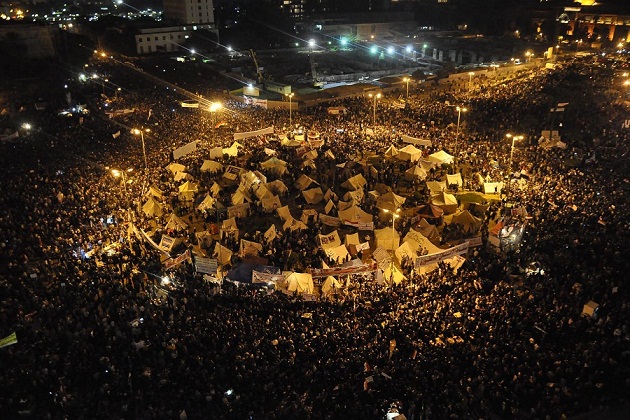 Professional syndicates and political groups marched to Tahrir Square on Tuesday afternoon to join the sit-in that has been in the square for nearly 10 days.

The groups marched in protest of President Mohamed Morsy’s constitutional declaration and his call for a referendum on the draft constitution.

A march leaving Shubra met up with another at Talaat Harb before converging with marches from Mohandeseen and the Cairo Opera House.

Yehia Kalash, marching with the Journalists’ Syndicate, is spokesperson for the National Committee for the Defence of Expression and Creativity. He said the articles dealing with freedom of expression and rights of journalists in the draft constitution are “catastrophic.”

Egyptian Communist Party member Sayed Fouad was injured during the revolution and said he has spent the past 10 days in Tahrir calling for the cancellation of the “dictator declaration.” He added that his party would be marching towards the Presidential Palace on Tuesday night.

Deputy Secretary General of Al-Tagamo’ Party Mohamed Saeed, who participated in a joint march alongside the Popular Current, said his party had yet to decide whether they were going to the Presidential Palace or not. “Unity is very important.  We will wait for a decision from the National Rescue Front.”

Mohamed Abdallah Nasr, an Al-Azhar Sheikh and member of the group Azharians for a civil state, “we are sitting here until Morsy leaves and tyranny goes away.” Marina Tarek, a Copt, said she is participating in the protest because she dreams of a better future for his children. “I suffered from discrimination as a Copt and as a woman. I don’t want this for my children.” Tarek said she comes to Tahrir every day after work, and leaves at 11 pm.

Ahmed Hassan Shehate, a retired military officer, said he is in Tahrir because Sinai is in great danger, “we have shed blood for Sinai, and we won’t surrender as Morsy is granting Sinai to his fellows in Gaza.”

There are the unaffiliated citizens who are marching because they believe their lives will be changed by recent political events.

Ahmed Mohamed, a farmer from Al-Gharbiya, said that he is participating in a protest for the first time in his life because Morsy turned out not to be a president for all Egyptians. “I voted for Morsy and I regret it. He promised to buy our rice crops for EGP 2,000 but he didn’t. He said he would cancel our debts but he didn’t. He said he would be president for everyone and he isn’t.”

Rania El-Masry, a tour guide, said she lost her job after the revolution but was patient in hope for freedom and a better life. “Now we have no jobs, no freedom, and no life. I have never participated in any protest or march before. But now that we have nothing, I should definitely protest.”

There were also marches in Alexandria, Suez, Mahala and Sharm El-Sheikh.