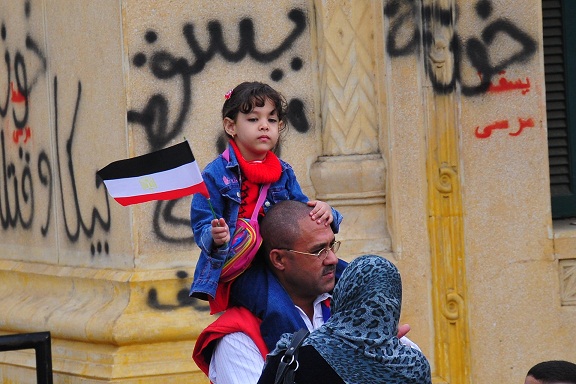 The Muslim Brotherhood and Freedom and Justice Party (FJP) have announced a demonstration in front of the presidential palace on Wednesday afternoon, a day after opposition groups massed there.

The Brotherhood spokesperson Mahmoud Ghozlan said the reason behind the rally was protecting the legitimacy of the state after Tuesday’s opposition march to the palace. “The Egyptian people elected the president legitimately and what they need now is to show their support of legitimacy to those willing to destroy everything and bring us back to ground zero.”

FJP spokesperson Ahmed Sobei said the party had not decided whether they would leave at night or hold a sit-in in front of the palace. “We have the right to organise a rally or even a sit-in to support legitimacy, but we will never conduct any violent actions,” he said. “The opposition groups have the right to reflect their opinions and so do we.”

Sobei said all the political groups supporting Morsy would participate in the rally. He mentioned Al-Nour, Construction and Development, and Asala Islamic parties.

In response to the planned Islamist demonstration, the Popular Current called on its members to head to the presidential palace to support anti-Morsy protesters already there.

Al-Dostour Party warned that holding a pro-Morsy demonstration at the palace while opposition groups were already there could result in violence. The party said it held Morsy responsible for protecting Egyptians from violence at both the palace and in Tahrir Square.