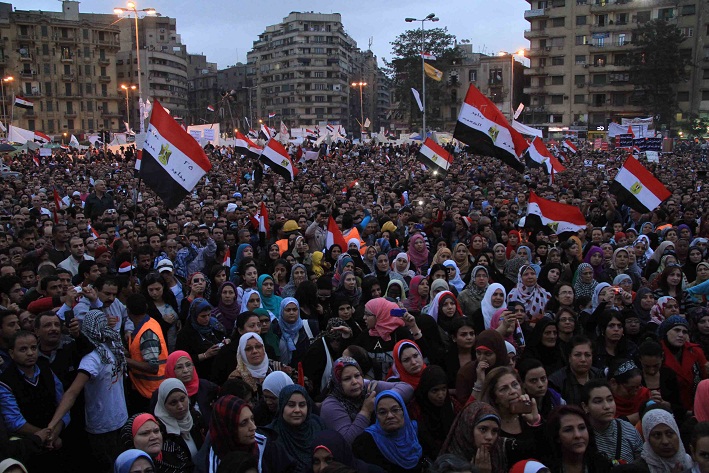 The front issues a statement after mass demonstrations Tuesday night that demonstrated the popular support behind the National Rescue Front, a recently formed coalition of opposition groups that have united in an effort to confront the actions of President Mohamed Morsy. Hesham Akram, the deputy head of Al-Adl Party, said that street demonstrations like those that took place at the Presidential Palace and also in Tahrir on Tuesday, give politicians from the National Rescue Front the cover they need to claim legitimacy in the face of the Islamist dominated government.

“We’re trying to save the country from the divisions that are happening. [These three demands] are the solution that we can see,” said Shady Ghazali Harb a member of the steering committee of Al-Dostour Party, one of the leading parties in the National Rescue Front.

Harb said these three demands were selected because, “they are the demands of the vast majority of Egyptians. This constitution does not represent everyone and this decree is a true act of dictatorships. So these are the most prominent.”

The National Rescue Front set 7 December as a deadline for their demands. Until then they stated that they will continue to sit-in outside the presidential palace and in Tahrir Square.

If the demands are not met Harb said there will be a continued escalation like the one witnessed this week. “The problem,” concluded Harb, “is Morsy doesn’t listen as much as Mubarak did.”

A press conference was scheduled for 7pm in Agouza for the National Rescue Front to officially roll out these demands.