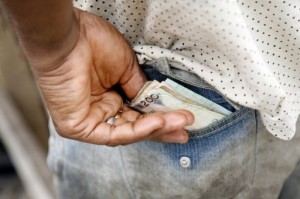 Egypt scored in the lowest third of an annual index that measures corruption perception worldwide with a score of 32 out of 100 in Transparency International’s 2012 Corruption Perceptions Index (CPI). This puts them behind Algeria, Ethiopia, and Mali, and 58 points behind global leader New Zealand.

Kinda Hattar, Transparency International’s regional coordinator for the Middle East and North Africa, said the index score should not be compared to previous years for evidence of slipping or climbing a few points. Instead, the number should speak to how good, or how poor, a job the state is doing toward resolving corruption. The message to Egypt is that much more needs to be done.

“We see this number more a ranking. Egypt still is in the lower part of the index,” said Hattar. “That means that Egypt is still a country that needs to work harder at fighting corruption and increasing transparency.”

Egypt has not shown dramatic improvement in the field of corruption despite the country being consumed for the past two years by a movement with the rooting out of corruption as one of its central focuses.

President Mohamed Morsy came to power in part because he was seen as coming from outside the corrupt system of which his opponent, former Prime Minister Ahmed Shafiq, was a part.

“Taking out one person from the system does not change the system,” said Hattar. “When you look at what has happened in Egypt that means there is a will by the people for change. Now you have to make the system more transparent and more open to fighting corruption.”

In addition to changes in the political situation, Hattar said there needs to be changes in the enforcement of laws to truly make a systematic change.

Another important ingredient is “a good judicial system and an independent one that is able to prosecute those who are corrupt.” In this sense, President Morsy’s recent constitutional declaration takes both a step toward and a step away from this goal. While the declaration begins by stating the pursuit of former officials, it goes on to temporarily strip the judiciary of much of its independence.

Egypt’s CPI ranking points to a deep-seeded mistrust between the people and the government. It is a commentary on how citizens perceive their ability to fairly access government services, the openness of access to information, the freedom of the press, and a faith that decisions are being made for the good of the Egyptian people, not an elite clique that is able to make those decisions.

One method Hattar suggested for combating corruption is to create laws that will offer protection for whistleblowers, thereby fostering an environment that encourages informing against corruption.

Transparency International creates its rankings by the collection of data from independent groups that monitor governance and are vetted for quality and consistency.