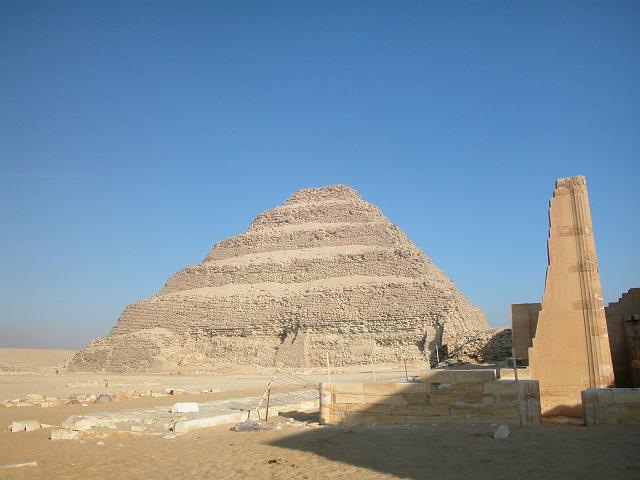 For the last six months the pyramid of Djoser has witnessed much controversy over its renovation. Fears that the oldest pyramid may soon fall have been spread by Egyptian archaeologists, professors and antiquities enthusiasts. The six-stepped layered structure stands 62 metres high and was built under the reign of Pharaoh Djoser in 2611 BCE, as his final resting place.

The plan of the pyramid has been attributed to the engineering master of the time, Imhotep, and it was constructed using 11.6 million cubic feet of stone and clay. The pyramid is a world-heritage site listed by UNESCO.

The renovations started late 2006 after a report was filed by Hassan Fahmy, professor of architecture at Cairo University and the Antiquities Authority’s representative currently overseeing the renovations. “The Antiquities Authority hired me to write a report on the conditions of the pyramid after the 1992 earthquake,” he said. “I filed a report recommending immediate intervention to be followed by a renovation process because I saw severe damage; what I’d call critical equilibrium. In 1998 the report was finally given due attention.”

In 2002 the projects sector approved the project and started looking for a company to implement it. Fahmy stipulated that the company should have experience with subterranean structures as the actual structure starts nearly 32 metres underground.

A bid was offered and different companies applied and were filtered until the tender was between two companies; the Arab Contractors and El-Shorbagi. The latter won the bid. “Our offer was EGP 7 million less than the Arab Contractors,” said Michelle Fareed, El-Shorbagi’s project director. “And we had done seven previous projects with the Antiquities Authority.”

A major criticism of El-Shorbagi by the archaeological community was their lack of renovation experience. “Djoser was their first project,” said Monica Hanna, archaeologist and researcher at University of Humboldt in Berlin. “All other projects were given to them later on.

How can they be allowed access to a national project that should have been given to an organisation like UNESCO rather than a company?”

Hannah wondered if there was any serious stabilisation problem with the pyramid. “It was stable until 2003 and the latest report by the EFAO stated that it was in a good condition.”

Marwa El-Zeiny, renovations expert, confirmed that “in 2006, it only needed minor restoration, similar to all periodical procedures antiquities go through.”

Fareed ascertained that the company is only the “executive branch of the project. In the beginning there was a lot of confusion about the project. We can only implement things according to written directions from [Fahmy] who is the Authority’s representative.” In the past though, “any acquaintance of [Former Minister of Antiquities] Dr Zahi [Hawas] was allowed on the site and to give an opinion and tell us what to do.

They refused however to give us those directions in writing, which caused a lot of confusion.” Hawas later found out about these mishaps and in 2008 he formed a quartet of experts to oversee the project. “From then on we were able to work and we had weekly meetings in which all steps could be discussed. We owe them a lot.”

Concerns regarding the new renovations surfaced this year after a report, contracted by UNESCO and filed by Professor Georgio Croci in 2011, noted that the new structure did not “absorb any load” and thus did not help with the “general stability” of the pyramid.

He also stated, “there is no detailed [report on]  the interventions and their work in progress is carried out as ‘extraordinary measures’ replacing ancient [with] non-original stones in order to reproduce the original shape.”

Fahmy accepted that new stones were introduced to the pyramid but said “ around 80-90 per cent of the stones are original.” He saidd they analysed the original stone and mortar at Cairo University and tried to get similar material.

The new stones were made of lime and the mortar was made of lime, sand and the “best kind of clay, which is the same mortar originally used in building the pyramid. When all three react together they bond becoming an adhesive.”

Archaeologists view clay as a problematic adhesive, “as it naturally absorbs and loses water which happens repeatedly causing it to lose its main role to act as an adhesive,” explained Ibrahim Badr, a renovations expert.

“It simply dries up and becomes [brittle]. Besides some of us took a sample from the stones that already fell and compared the old and new stones and the mortar used.”  They found the stones to be completely different from the original ones and that the mortar was made of clay, bicarbonate calcium and VAC which contains sulfur.

“Humidity when mixed with sulfur causes sulphuric acid, which erodes the [stones] and bicarbonate calcium becomes like a dried up lemon when it loses water, losing its adhesive role.” Badr said clay should not to be used as an adhesive but only as a filler. “Clay was used in Islamic Cairo renovations and that has turned out to be a disaster.”

Hannah also is concerned that the structure is losing its authenticity, “replacing 10-20 per cent of the original stone can cause it to lose its original glamour and authenticity which is a requirement from UNESCO to keep world heritage status.”

The other problem is the chemical reaction that will ensue when it rains. “The sulfur and the carbonated calcium will react and become acidic and will erode the stone.

The new  stones have really large pores allowing it to absorb a huge amount of water. This adds significantly to their weight and when they become heavier they use the old stones for leverage, leading to parts of the pyramid falling down.”

Archaeologists criticise the changes of the general outlook of the pyramid. Comparing the way the pyramid looks now with a black and white photo from it taken in the past, the change it underwent in the last six years of renovations is apparent. An accusation denied by Fahmy who states that the only changes may have been a result of natural forces. “The only change I can say happened is that we had to fill the gap created by the falling of the sixth step.”

He also insists that they could not find any specific architectural plans of the structure. “We were surprised by how deep and wide the pyramid is. We had to use ‘elastic restoration’ to be able to change the renovations plan if need be. We checked with archaeologists and historians and nothing provided us with engineering data that we can use.”

The elastic restoration method caused a budget expansion. El-Shorbagy took over the project with a bid of EGP 25 million in 2006 which increased to EGP 53 million by 2011. “We discovered new problems that we could not foresee,” explains Fareed. “For example Fahmy could not access the sixth step which we later discovered to be almost eroded.”

The monumental change in budget caused several archaeologists to question the benefit of the renovations. Fahmy explained that they did not have architectural plans of the pyramid and tried with historians and archaeologists who gave them nothing but history.

“The pyramid starts almost 32 metres underground where the granite burial chamber is located and contains a maze of tunnels leading up to the chamber. It is an architectural gem,” he said. “But there were no plans to follow. We only used ones by the late French professor Jean Phillipe Lauer.”

Hannah contradicted this, saying there were plans published by American archaeologist Mark Lehner, with over 30 years experience excavating in Egypt that could have been easily used.

“No one is allowed to relocate stones unless inevitable and in a very limited way,” said El-Zeiny. “These conditions do not apply with current renovations. They did not keep the original general structure, colour coordination or even material used.” Hannah adds that there is a current “casing” of the pyramid with more stones making it a “new pyramid” which adds to the weight of an already overborne structure.

When asked when the renovations are expected to be completed, Fareed said that they have a “phase-by-phase” project not a long-term plan which makes it hard to predict.

“We got wind of these problems in 2012,” said El-Zeiny who, along with other archaeologists, started a campaign to find out what is happening with the pyramid. “Where is the Antiquities Authority in all of this?

This did not happen overnight. Several professors from Cairo University have visited the place and warned against what is happening and anyone with a limited amount of experience commented on the wrong way the renovations are being constructed.”

“It is the oldest full-structure pyramid found, the first successful attempt to erect a pyramid,” said Badr. “It is not just Egyptian heritage but rather of the world.” He compared the current renovation steps with those undertaken 40 years ago during the relocation of the Abu Simble temples which were moved because of the flooding of the original site building of the High Dam in Aswan.

This was handled by UNESCO and is considered one of their most successful projects. “People at that time had the correct vision. How can you deal with a company that has no experience, tools, renovators or engineers and give them the oldest pyramid to work on? Why did [the pyramid] need renovations? Where are the reports saying the pyramid needs to be completely renovated because it is in danger of collapsing?”

Archaeologists are demanding an inquiry on the renovation of the pyramid, its status and the financial process. Fahmy welcomed the idea saying, “as long as there is constructive criticism, anyone is welcome.”

The demand for an “objective” committee, that neither belongs to the Egyptian government nor to the contracting company, to head this investigation is gaining momentum in archaeological circles. UNESCO has assured Véronique Dauge, the World Heritage Centre specialist on Egypt during a phone call that a “new mission will visit Egypt soon” and will quite possibly check out Djoser pyramid.

She could not give any details on the current condition of the pyramid except for Croci’s report, saying that he is “an engineering expert” mainly concerned with the stability of the pyramid. She added that only twice in UNESCO history had a site been removed from the world heritage site list. “This is not done overnight. Several warning are given to the country before this step is taken.”

“A scientific, financial and administrative committee should be formed,” said El-Zeiny, “to review everything that has happened since 2006 and cross check whether the pyramid needed this extreme intervention or not.”  Hannah added that there are ways to reverse these renovations if they are proven to be lacking.

El-Zeiny, along with Badr, formed a group called Knights of the Antiquities which became very popular among archaeologists because they raise concerns on problems with antiquities in Egypt. “We have been accused of causing trouble and seeking attention,” said El-Zeiny, “we communicate with the Antiquities Authority via Facebook and they really dislike us.”

Garnering media attention, the Djoser pyramid was hounded by reporters causing current Antiquities Minister Mohamed Ibrahim to give several interviews in which he guaranteed the stability of the pyramid and the soundness of the current renovations. “We were forbidden from talking to the media due to all the conflicting reports,” explained Fareed.

Meanwhile concerned archaeologists remain worried. “What we saw was only on the outside, we do not know what is happening on the inside,” explained Badr. “The old stone is strong, but how much can it take, we do not know.