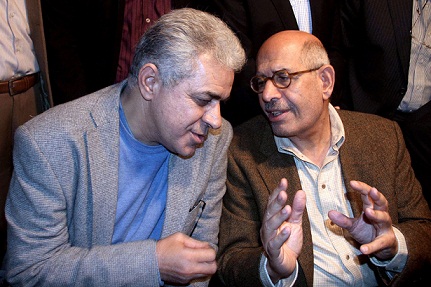 The National Front for the Salvation of the Revolution, a coalition of civil and moderate political groups, refused President Morsy’s initiative to hold talks following his speech Thursday night.

In a statement the coalition expressed “deep sadness” over Morsy’s speech that ignored “repeated demands for conciliatory solutions that can guide Egypt out of this current catastrophic situation.”

The front went on to criticise Morsy’s denial that the “Freedom and Justice Party—to which he belongs—was behind the incitement of the clashes Wednesday night, as seen on television and documented by newspapers.”

The statement accused Morsy of ignoring that it was his “supporters” who attacked the peaceful sit-in outside the Presidential Palace, which helps further divide the Egyptian people after he called those protesting “thugs.”

Morsy was also criticised for ignoring repeated demands to rescind the constitutional declaration issued on 21 November and “pushing for a referendum on a constitution that promotes dictatorship and is not approved by the majority of Egyptians. who did not participate in writing it.”

The front refused Morsy’s invitation for talks on Saturday, saying it lacks a serious intention for real negotiations. It called for the appointment of a “neutral” judge to investigate the clashes on Wednesday night and said that it will continue using all “legitimate” methods to “correct the path of the revolution.”

Egyptians living abroad are set to start casting their referendum votes on Saturday.

Many diplomats have made public their unwillingness to supervise the process.