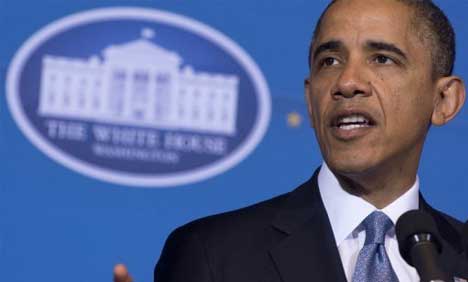 AFP- US President Barack Obama expressed “deep concern” Thursday over the recent deadly political protests in Egypt, in a call to his counterpart Mohamed Morsi, the White House said.

Obama also told Morsi that it was “essential for Egyptian leaders across the political spectrum to put aside their differences and come together to agree on a path that will move Egypt forward,” the White House said in a statement.

Seven people died in clashes between Morsi’s supporters and his mainly secular opponents on Wednesday in Egypt’s worst political crisis since Morsi took office in June.

“President Obama called President Morsi today to express his deep concern about the deaths and injuries of protesters in Egypt,” said the statement issued by White House spokesman Jay Carney.

Obama “emphasized that all political leaders in Egypt should make clear to their supporters that violence is unacceptable,” it said.

The US president welcomed Morsi’s call for dialogue beginning Saturday in his offices, but said it “should occur without preconditions” and urged opposition leaders to take part.

Obama “reiterated the United States’ continued support for the Egyptian people and their transition to a democracy that respects the rights of all Egyptians,” the statement said.