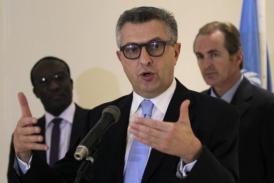 (AFP) – BEIRUT — The half a million Palestinian refugees living in Syria should keep out of the country’s conflict and their neutrality be respected, UN Relief and Works Agency chief Filippo Grandi told AFP.

“The Palestinians should remain neutral and everybody should respect that. Nobody should put them into the crisis,” Grandi said in an exclusive interview on Thursday, shortly after his arrival in Beirut from a visit to Damascus.

“The majority does not want to fight. They know it is going to be even worse,” the UNRWA commissioner general added. “Every day, Palestinians are killed in Syria.”

In the meetings, Grandi raised the prospect of Palestinian refugees becoming involved in the conflict.

“The government guaranteed they are not encouraging armed groups,” Grandi said.

“We are very concerned about the Popular Front for the Liberation of Palestine-General Command,” an armed group in Syria that supports the regime of President Bashar al-Assad, he said.

The PFLP-GC is especially strong in the Yarmouk camp of Damascus that is home to some 150,000 refugees. Alongside other south Damascus districts, Yarmouk has been hit by shelling and clashes between anti-Assad rebels and the army.

Grandi visited Yarmouk during his visit to Damascus.

“I visited a class of girls in ninth grade. We couldn’t hear each other because of the shelling, but they were attending lessons,” the UNRWA chief said.

“What was the most striking in Yarmouk is that there is hardly ever any moment when you don’t hear mortars,” said Grandi, although “there is no targeting of Palestinian camps as such.”

“In Yarmouk, you have three main streets, two are closed to traffic, because the shelling is very close.”

Fleeing violence in neighbouring Tadamun and Al-Hajar Al-Aswad districts, “600 displaced, mostly Syrians, are living in a school in Yarmouk,” he added.

“It means that about 80 percent of Palestinians in Syria need help. They were 60,000 last month.”

Emphasising the lack of food, medicines, security and heating fuel as winter sets in, Grandi said: “The crisis is very deep. The humanitarian crisis is already here and needs are escalating.”

As the crisis in Syria worsens, Grandi said the “Palestinians should not be forgotten in the next UN appeal” for funds.

“The international community has been unable to make a decision all together,” he said. “If they can’t solve the crisis in Syria politically, they should give funds.”

After the United Nations announced its decision to withdraw non-essential staff from Syria, Grandi said: “We can and we must stay.”

UNRWA’s mission too has suffered from the 21-month conflict in Syria. Aid convoys have been seized by armed groups, “as we have seen in Somalia or Afghanistan,” while five UNRWA staff members have been killed, he added.

“People are worried about the next phase,” said Grandi, who said that the worst fear for Palestinians was being kidnapped for ransom.

“People fear a lawless Syria where hundreds of opposition groups are operating on their own, and where law and order collapse and violent anarchy prevails.”

Some 520,000 Palestinian refugees live in Syria, according to UNRWA, among them 400,000 in Damascus and its province. UNRWA provides education for 66,000 refugee children and 70 percent of schools are still running.