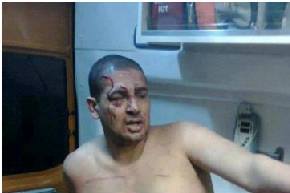 A member of the dissolved People’s Assembly, Mohamed Abu Hamed, was admitted to hospital Friday night after being assaulted by supporters of President Mohamed Morsy.

The demonstrators stopped Abu Hamed’s car in Salah Salem Street in Cairo and then beat him for half an hour.

“I was in the protests at the presidential palace and there were news that Muslim Brotherhood demonstrators are on their way to attack us. There were women and children with us, so I had to verify the news,” Abu Hamed told the Daily News Egypt.

He said as soon as he reached Salah Salem demonstrators recognised him and started shouting his name.

“My car was locked but they jumped over it and broke the windshield, they got me out and raced to beat me,” he said.

Abu Hamed added that some demonstrators shouted, “Morsy wants him alive” while others shouted “Sheikh Abdallah Badr permitted killing him.”

He said two policeman and two members of the public, including a reporter for Al-Mehwar channel, helped free him from the crowd and called an ambulance.

Abu Hamed was taken to hospital where he was treated for cuts to his face and bruises.

The Freedom and Justice Party on their official Facebook page alleged that Abu Hamed had tried to run over demonstrators and that that they found a large number of weapons in his car.

They also posted a video showing a demonstrator claiming that had Abu Hamed attacked  Morsy’s supporters.

“He ran over many, we stopped him and kept hitting his car,” the demonstrator said. “He started loading his gun and waving it at us then we got him out. We agreed we shouldn’t kill him we shouldn’t make a hero out of him. We decided to turn him in.”

Abu Hamed denied the allegations. “They jumped on my car and stopped me. If I ran them over I’d have managed to pass.”

He added that the demonstrators took his licensed handgun, his papers, identification card, passport and cell phones.