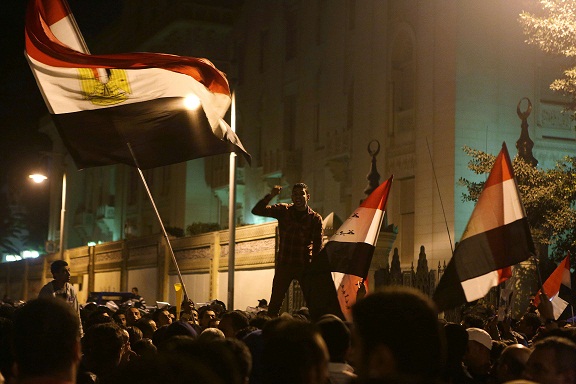 Detainees arrested during the presidential palace clashes were released on Friday night.

Nearly all of the 133 arrested were released without bail following investigation. Only four detainees were not released; their detention was extended for four extra days because they were allegedly caught in possession of guns, gunshots and Molotov cocktails, said Sayed Fathy, lawyer at the Front for Defending Egypt’s Protesters.

“The investigations were quite simple,” Fathy said, “the prosecution was not convinced by the charges.”

The detainees were charged with murder, attempted murder, rallying, destruction of vehicles and property, and intimidation. The prosecution could not find any evidence supporting the charges, Fathy confirmed, adding that the possibility of the remaining detainees facing trials for such charges is highly unlikely.

In a speech addressing the nation Thursday night, Morsy cited the prosecution’s investigation, which was ongoing at the time. He confirmed that at least 80 individuals were arrested, saying that they had confessed to having received money and weapons to engage in acts of violence.

“Unfortunately, some of those arrested have links and connections to those who introduce themselves as political groups,” Morsy said during his speech. He also implied that those who provided the detainees with money to incite violence could be foreigners.

Morsy added that the protests which were held at the presidential palace on Tuesday night got violent. He claimed that a number of presidential vehicles were attacked by the protesters, adding that one of the drivers was injured and moved to hospital.

“Those detained are all innocent youth who have been kidnapped and tortured by Muslim Brotherhood members near the palace,” Fathy said.

According to Fathy, three of the 129 released detainees belonged to the Muslim Brotherhood.

The detainees filed a report accusing Morsy and Muslim Brotherhood leaders, including Mohamed Al-Beltagy, Essam El-Erian and Khairat Al-Shater, of inciting violence against them.

The Wednesday clashes left at least six people dead, according to the Ministry of Health’s death toll. The Muslim Brotherhood’s supreme Guide Mohamed Badie announced on Saturday that the Brotherhood lost eight of its members in the clashes.