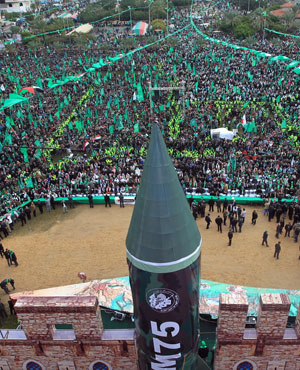 Hundreds of delegates from around the Muslim world traveled from Egypt to Gaza to help Hamas (the Palestinian Islamic Resistance Movement) celebrate its 25th anniversary. It is unlikely that this international presence would have been possible without the political changes in Egypt over the past two years.

“The event would be very different without the new political system that is in Egypt,” said Hani Al-Basoos, a political science professor who was speaking from the anniversary rally in Gaza on Saturday. “Without permission from the Egyptian authorities it would have been impossible for them to arrive.”

Tens of thousands packed into Al-Qatiba Square in Gaza City. The open air party was filled with green banners flapping in the wind and guarded by armed men perched atop neighbouring buildings. The public nature of the gathering showed little fear of an Israeli attack like the November strikes that laid waste to swathes of Gazan cities.

Al-Basoos said Hamas had taken all necessary precautions for securing the event, but he doubted that an Israeli attack was possible given the large international presence.

There is one notable and high-profile Israeli target attending. Hamas head Khaled Meshaal entered the Gaza Strip this week for the first time in his life. The visit also marked only the second time he has been in Palestine since leaving as a child during the 1967 war. Meshaal dropped to the ground in prayer after entering from Rafah.

In a signal that perhaps reconciliation is on the way for the Palestinian leadership, Fatah factions will be attending the anniversary.

Despite political turmoil at home “many Egyptians came,” said Al-Basoos. “Around 5,000 Egyptians had planned to celebrate with the Palestinian people [but] because of the domestic tension in Egypt, it was not easy for many Egyptians to come. Despite this, many Egyptians are now standing and celebrating the 25th anniversary of Hamas.”

Egyptians’ ability to travel to and from the event sheds light onto the current nature of the Egypt-Gaza border crossing. The crossing was expected to see increasing traffic after President Mohamed Morsy, whose Muslim Brotherhood has close ties to Hamas, was elected. The opening since then has been seen as too limited by some observers and cross border attacks over the summer further complicated the political situation surrounding the crossing.

Al-Basoos said crossing the border is “easy, it is open seven days a week.” He said that the international delegations stayed in Gazan hotels overnight and will likely return to Egypt on Sunday. “The Egyptian side is facilitating such movement.”

Sheikh Hafez Salama, the Suez preacher who has been part of the call for a larger religious presence in the Egyptian constitution, was also reported to be attending the festivities, but his presence could not be confirmed.