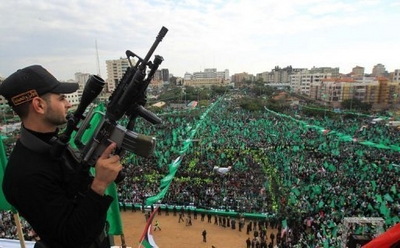 Gaza City, Palestinian Territories (AFP) – Tens of thousands of Palestinians massed in Gaza on Saturday for a rally marking the 25th anniversary of Hamas to be addressed by the ruling Islamist movement’s leader in exile.

Politburo chief Khaled Meshaal, who arrived from Egypt on Friday, was on his first ever visit to Gaza and his first to the Palestinian territories since 1975.

The celebrations come just over two weeks after an Egyptian-brokered truce ended eight days of bloodshed with Israel which left 174 Palestinians dead.

Light rain in the early morning did not deter thousands of Gazans – most of them women – from turning out well before the noon (1000 GMT) start of the main event in the Al-Qatiba complex west of Gaza City, an AFP correspondent reported.

Parallel rallies were being held across the Gaza Strip.

The security forces were out in strength, closing off nearby roads from the early hours.
Dozens of masked members of Hamas military wing the Ezzedine Al-Qassam Brigades kept watch from surrounding rooftops.

Between the chairs was placed a model of an M75 rocket of the sort fired at Israeli cities during last month’s conflict that began with Jaabari’s assassination.

On the backdrop was a model of Jerusalem’s golden-domed Al-Aqsa mosque, which appears on the Hamas symbol.
Head of Hamas public activity Ashraf Abu Zaed said he expected more than 200,000 people to participate in the anniversary celebrations.

Hamas spokesman Fawzi Barhum told AFP that at least 3,000 people from Arab and Islamic states had arrived in Gaza in recent days to attend the events.

Founded in 1987 shortly after the start of the first Palestinian intifada, or uprising, Hamas was inspired by Egypt’s Muslim Brotherhood.

Its charter calls for the eventual destruction of Israel and the establishment of an Islamic state on the pre-1948 borders of the British Palestine Mandate.

Speaking in Gaza on Friday, Meshaal promised to “walk down the route of reconciliation, bury the division [with Fatah] and empower unity in order to be aligned as one in the face of the Zionist entity,” Israel.