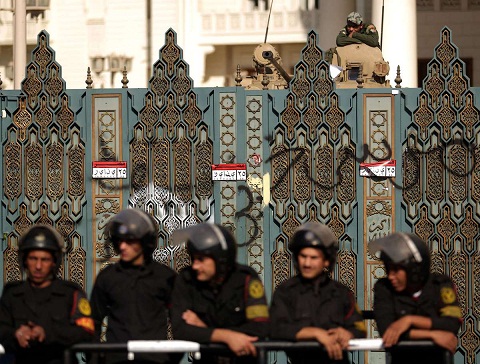 The armed forces have confirmed its support for a national dialogue to solve the current crisis.

The statement, released on Saturday by the armed forces official spokesperson said, “the dialogue approach is the best way and only access to a consensus in the interests of the nation and its citizens. The opposite would get us into a dark tunnel with disastrous consequences, which we will not allow.”

The statement also asserted that in order to address the current crisis the people should work within a legal and democratic process “which we agreed upon and accepted to move to the future accordingly.”

President Mohamed Morsy announced an initiative to hold talks with opposition leaders, which took place on Saturday. However, the National Front for the Salvation of the Revolution, a coalition of non-Islamist and moderate political groups rejected this invitation.

The statement expressed “sorrow and concern for the developments of the current situation and the status of the divisions… which threaten the pillars of the Egyptian state.”

Waleed El Haddad, a member the Freedom and Justice Party, said in his opinion, “[the armed forces] are sending a message to the people that they are not biased towards a specific camp and are focusing on the legitimacy of the democratic process.”

Jermeen Nasr, a founding member of Al-Dostour Party, believed the statement was “an indirect warning for the Muslim Brotherhood, President Mohamed Morsy and whoever represents the executive authority to reach a solution with the revolutionary civilian faction concerning the current situation in Egypt to prevent a civil war.”

The statement confirmed that the armed forces called for people to “express their views peacefully, away from all forms of violence, which is currently taking place in the country.”

“Failure to reach a consensus and the continuation of the conflict will not be in favour of any of the parties, the entire homeland will pay,” warned the spokesperson.

Supporters and opponents of Morsy clashed in front of the Presidential Palace on Wednesday night that led to the deaths of six people, according to the Ministry of Health.

“The military institution always sides with the great people of Egypt,” the statement concluded.