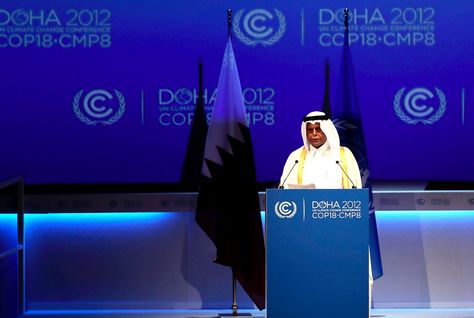 Doha  (AFP) – Qatar, host to the latest round of UN climate talks, urged deadlocked negotiators on Saturday to accept a consensus deal to end the standoff that saw haggling continue way past the scheduled close of talks.

After a long night of talks, conference chairman Abdullah bin Hamad Al-Attiyah called tired negotiators to a stock-take meeting, where he urged them to consider a set of compromise agreements.

“I believe that this is a package that we can all live with and which is also good for our planet and future generations,” he told the delegates from nearly 200 countries, including dozens of ministers.

“The time has come for the final push,” Attiyah said, and gave the particpants 90 minutes until 10.00am (0700 GMT) to consider their position.

“We have to close this in the next couple of hours.”

Negotiators in Doha must extend the greenhouse gas-curbing Kyoto Protocol as an interim measure to rein in climate change and smooth the way to a new, global pact due to take effect in 2020.

But the issue of funding to help poor countries deal with the fallout from global warming and convert to planet-friendlier energy sources has hamstrung the haggling in the Qatari capital.

There was also deadlock on a separate demand by least developed countries and those most at risk of sea level rise that provision be made for the losses they suffer because of climate change – a phenomenon they blame on the West’s polluting ways since the industrial era.