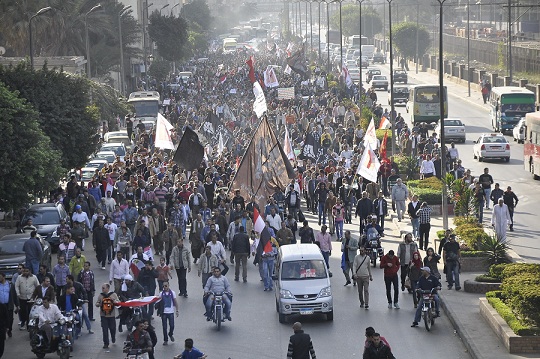 Protesters across Egypt have voiced their rejection of President Mohamed Morsy’s latest decisions, which led to bloody clashes near the presidential palace on Wednesday.

Wednesday’s clashes left at least six people dead, according to the Ministry of Health. The Muslim Brotherhood’s supreme duide Mohamed Badie announced on Saturday that eight of its members were killed.

Protesters in Alexandria were attacked by a group of people armed with knives, after some of the protesters broke into the Alexandria governorate building.

“Upon our arrival some protesters pushed the door of the council open,” protester Islam Al-Hadary said. “It was unlocked.”

The governorate’s official spokesperson Ahmed Al-Ibkawy said protesters had stolen documents and computer hard-drives. “Both were arrested later,” he said, referring to those believed to have taken the computer equipment.

A car load of men armed with knives then attacked the protesters.

Al-Hadary was assaulted and his arm and skull were fractured. The head of Al-Wattan newspaper’s Alexandria office, Haytham Al-Shaikh, was also injured.

A third man was arrested after firing a rifle, Al-Ibkawy said. “I don’t think the assailants were revolutionaries,” he added.

Meanwhile in the industrial city of Mahalla, protesters expelled the head of their city council Friday night, and announced their autonomy from the “Muslim Brotherhood state.”

In President Morsy’s hometown of Zagazig in Sharqeya, clashes with the police have been ongoing since Thursday. The police used teargas on Thursday in an attempt to disperse a protest organised by the 6 April movement (Ahmed Maher front) near Morsy’s house. Hazem Ibrahim, 6 April coordinator in Sharqeya, said the attempt backfired as more people joined the protest.

Protesters gathered again near the president’s house Friday and clashes resumed. The police blocked all side streets within the city, Ibrahim claimed.

A number of protesters were arrested Friday night, including 6 April member Ahmed Noor.

“Noor shot videos of other detainees subjected to torture during their arrest,” Ibrahim said. Noor was released Saturday morning.

Protesters, including many tour guides, marched against Morsy’s constitutional declaration and the scheduled constitutional referendum in the resort city of Hurghada in the Red Sea governorate on Friday, state-owned newspaper Al-Ahram reported. Protesters marched on Saturday as well, reported the Egyptian Radio and Television Union’s website (ERTU).

Across Cairo different marches headed to the Presidential Palace after Friday prayers. The protests remained peaceful.