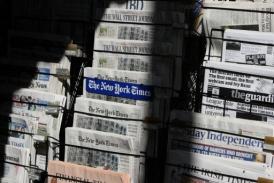 The front page of the Washington Post covered the march on the presidential palace, the front page of Spain’s El País showed an Egyptian tank surrounded by protestors, and the front page of Germany’s Frankfurter Allgemeine Zeitung ran the headline “Egyptian opposition rejects talks with Morsy.”

Meanwhile on the political front, Egypt was at the centre of a US State Department press briefing on Friday where deputy department spokesperson Mark Toner refused to criticise Morsy. He admitted that the US administration is “very, very concerned about the situation in Egypt,” but repeated attempts by reporters to place blame on the Egyptian president were avoided by Toner’s steering of the conversation back to safer topics such as a condemnation of violence and a plea for dialogue.

US President Barack Obama called Morsy on Thursday night when, according to the White House, “he reiterated the United States’ continued support for the Egyptian people and their transition to a democracy that respects the rights of all Egyptians. [President Obama] underscored that it is essential for Egyptian leaders across the political spectrum to put aside their differences and come together to agree on a path that will move Egypt forward.”

Toner confirmed that the US is speaking with the government, opposition leadership, and the military in Egypt.

European Union foreign affairs head Catherine Ashton was similarly noncommittal when commenting on the battle raging within Egypt, saying, “I am following with concern the unfolding of events in Egypt and the clashes taking place between demonstrators. I urge calm and restraint on all sides.” Ashton and Obama are both heavy-handed in their urging for a democratic “transition,” but they are also both vague when it comes to the details of that transition.

The strongest words came this Friday from UN human rights chief Navi Pillay who reiterated her concern with both the process and the product of Egypt’s constitution drafting. “I believe people are right to be very concerned, not just about the way the process has been short-circuited, but also about some of the elements included in, or missing from, the draft text.”

Pillay is one of the world’s leading authorities on human rights and does not seem to be embracing the current proposed constitution, saying, “I am highly concerned, for example, by the absence in the current draft of any reference to the international human rights treaties which Egypt has ratified, and is bound to uphold. The 1971 Constitution, by contrast, stipulated the legal standing of these treaties.”

Meanwhile, international efforts taking place in Egypt continue to unfold. The EU this week approved projects with the intention of improving the “European neighbourhood” by supporting media, cultural, and private sector development in the Mediterranean region that includes Egypt. Nearly €30 million is being committed to these projects.

Friday also saw the conclusion of the Humanitarian Forum, hosted by the UN in Cairo, which aimed to improve coordination between Arab countries.