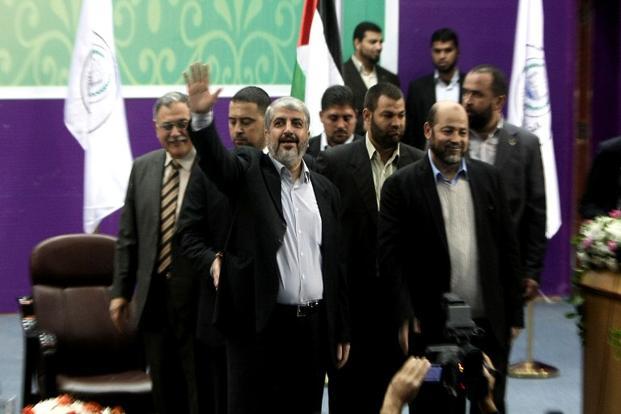 Azzam Al-Ahmed, head of Fatah’s central committee and its pointman for reconciliation talks, told AFP that the party “strongly welcomes the speech of Khaled Meshaal, which was very positive on the issue of the Palestinian division.”

“The speech was positive on the issues of one president for the Palestinian people, and one authority and one law, and we do not disagree with him at all on these issues, which are the focus of the reconciliation agreement that was signed by Fatah and Hamas and the other factions to end the division,” he said.

Meshaal, chief-in-exile of Hamas’s politburo, arrived in Gaza on his first-ever visit on Friday, and on Saturday addressed enormous crowds celebrating the Islamist movement’s 25th anniversary.

His speech, which warned that Palestinians would never “cede an inch or any part” of historic Palestine, also called for Palestinian unity.

“We are a single authority, a single reference, and our reference is the PLO, which we want united.”

He was referring to the Palestine Liberation Organisation headed by Abbas which represents the Palestinians in negotiations.

Hamas does not belong to the PLO but Meshaal said a year ago that his movement was “on the path to joining” it.

His comments then came as Hamas and Fatah signed a reconciliation deal that was meant to pave the way to parliamentary and presidential elections within a year.

But its implementation stalled as the two sides struggled to agree on the composition of an interim consensus government.

Earlier this year, Meshaal and Abbas signed a new deal in Doha, under which the president would head the interim government. But Hamas leaders in Gaza rejected the deal, and accused Meshaal of taking decisions without their backing.

Ahmed said he hoped that Meshaal’s call from Gaza for new reconciliation efforts meant the Islamist faction was now united on the issue.

“The importance of the speech is that he was in Gaza, and in the presence of the Hamas leadership-in-exile. We hope it reflects the position of all of Hamas,” Ahmed said.