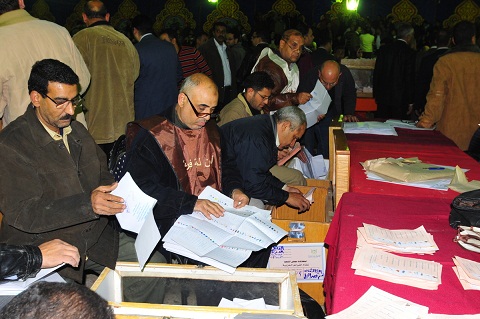 Enough judges have applied to oversee the constitutional referendum on 15 December to enable it to go ahead according to Vice-President Mahmoud Mekki.

At the Saturday evening press conference held after President Mohamed Morsy’s meeting with the opposition, Mekki said he personally ensured that enough judges had applied. Some judges had offered to do it for free, he added.

Mekki said there was no problem in terms of judges overseeing the referendum and that even if there were a shortage, the referendum could be held over several days to ensure judicial oversight over all ballot boxes.

Abdullah Fathy, deputy chairman of the Court of Cassation and the national Judges’ Club, denied there were enough judges available to oversee the referendum, however.

“There is an attempt to overstep the will of most judges in not overseeing the referendum and deceive the people who will decide whether or not to participate based on the existence of judicial oversight,” said Fathy.

“If only five to seven per cent of judges agree to oversee the referendum then it should be they who have to send written requests and not the other way round,” said Fathy.

Fathy added that the Supreme Elections Committee turned off its fax machines so that judges could not send official requests to be removed from overseeing the referendum and asked them to present personal written requests.

“Does it make any sense that 10,000 judges have to present the committee with requests to be excused from overseeing the referendum?” asked Fathy.

“Most judges and prosecutors are insistent on their position to boycott the referendum, and the minority who were against boycotting changed their mind after the violence at the palace,” he added.

The Judges’ Club had announced it would not oversee the referendum unless Morsy rescinded his 22 November constitutional decree. Although he did so on Saturday, he replaced the decree with another.

The club is scheduled to hold a press conference on Tuesday announcing its final position on overseeing the referendum following the new developments.

“I call on judges of Al-Minya to oversee the referendum now that the president has rescinded the constitutional decree, which is what we have been demanding,” said Soliman.

Morsy’s initial constitutional decree allowed him to dismiss the prosecutor general and appoint a new one. It also placed his decisions above judicial review and protected the Constituent Assembly tasked with drafting a new constitution and parliament’s upper house, the Shura Council, from court dissolutions. This alienated the judiciary and led judges to announce a general court strike and their intention to boycott the constitution referendum.