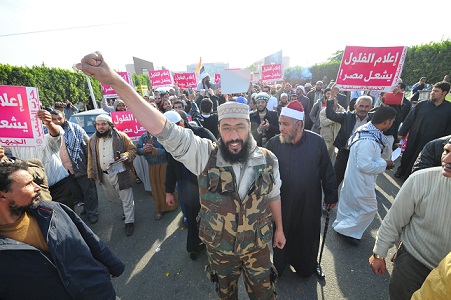 On Sunday hundreds of Islamist protesters continued a demonstration against media anchors, held in front of Media Production City in 6th of October City.

Demonstrators started their sit-in on Friday, when they called for purification of media organisations. The sit-in was held following calls by Hazem Salah Abu Ismail, the disqualified Salafi presidential candidate.

Demonstrators stood at the entrances of the area in which they held the sit-in and checked IDs of everybody entering that area. They marched towards Al-Fayoum road, adjacent to Media Production City, praising President Mohamed Morsy’s decisions and chanting slogans attacking famous media figures such as Emad Adeeb and Ibrahim Eissa. Demonstrators also chanted slogans criticising Mohamed ElBaradei and praising Al-Nour Party and the Muslim Brotherhood.

Abu Ismail said the Egyptian media organisations are corrupt and asserted that they are encouraging people to attack the state’s elected institutions. The disqualified candidate threatened the protesters opposing President Morsy saying, “If anyone attacks Itihadiya Presidential Palace, don’t ask us about Media Production City.”

Ayman Elias, spokesperson for Abu Ismail, said he has information proving that some media figures are igniting disorder in Egypt in an attempt to show that the Islamic project led by Morsy is failing. He added that an operations room inside Media Production City supervised the plan to ruin Morsy. “We are currently in the process of acquiring evidence proving that all the victims of the Itihadiya clashes are from the Muslim Brotherhood and not the other way around,” Elias said.

He added that Morsy’s new constitutional declaration is considered a concession that they reject. However, he asserted that they would accept the declaration only if it reached a national consensus.

Ahmed Abdullah, a Salafi member participating in the sit-in, said he is here to express his refusal to the media policy employed by most TV channels and newspapers; “they are showing only one side of the story and igniting violence against our legitimate president. We cannot accept this anymore.”

Abdullah added that demonstrators agreed on continuing their sit-in until the draft constitution is adopted. “By then, we would have powerful state institutions able to prevent these corrupt media figures by law.”

Ahmed Abu Ziad, member of Al-Shaab party, asserted that they abided by Abu Ismail’s call because he always had a correct vision of political situations, adding that Abu Ismail has come to Media Production City every night to support the demonstrators.

Another member of Al-Shaab party, Abu Mosaab, claimed there are attempts to assassinate Morsy, asserting that they have plans for every possible scenario, “if those seculars attacked Itihadiya Palace or elected President Morsy, we would be ready for anything.” When asked if armed response is on their list of plans, Abu Mosaab said, “everything is possible.”

Mostafa Abdel Moneim, a member of the Salafi calling, said the Media Production City represents the source of evil in Egypt. He explained that most of the TV shows broadcast from inside the city are attempting to show Islamists as terrorists endangering the state, “In a matter of fact, we are here to protect legitimacy, while liberals and old regime remnants are attempting to topple the president elected by 13 million Egyptians.”