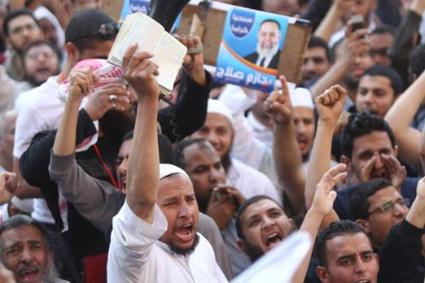 The opposition announced protests on Sunday against the declaration, whilst Islamist parties and political figures supported the president.

Mahmoud Ghozlan, spokesperson of the Muslim Brotherhood said the recent declaration removed any points of controversy or difference with political groups.

“Now it’s clear who wants democracy and respects people’s opinion and who wants to impose his opinions” Ghozlan said, referring to opposition groups.

He added that their calls for protests and ‘sabotage’ showed they don’t understand or respect the democracy they keep talking about.

Ghozlan said that although he participated in drafting the constitution, he would accept the consequences if the people voted no.

“But if the majority voted yes, will the opposition respect that?” he added.

“It reflects the weakness of the presidency. We’re offering the opposition one concession after another” he said.

He added that Islamist groups supported ending disputes and therefore they accepted the declaration but “only reluctantly.”

Spokesperson of Al-Shaab party of the Salafi Front, Ahmed Mawlana, said the declaration represented a road map for ending any conflicts between political powers.

He said that most opposition figures lost their credibility for refusing to negotiate with the presidency.

“They are seeking personal interests, Hamdeen Sabahy (former presidential candidate) wants the president removed after the constitution passes; thinking he can become the next president. El-Baradei believes the people will vote for Islamists which goes against his plans of westernisation,” Mawlana said.

Sobhi Saleh, prominent member of the Brotherhood and legal advisor to the Freedom and Justice Party said that the president had done everything he could to end the conflict.

“Morsy promised to agree on whatever compromise they reach. He showed utmost wisdom and fairness” Saleh said.

He added that the people were the ones to vote yes in the 19 March referendum, the ones who elected the president and who will vote on the constitution. “Nobody speaks for the people,” he said.

Shaaban Abdel Aleem, member of the supreme committee of Al-Noor Salafi Party said the declaration came in consensus after the dialogue between the president and the opposition.

“The ball is now in the opposition’s court, and their reaction will expose them to the people,” he said.