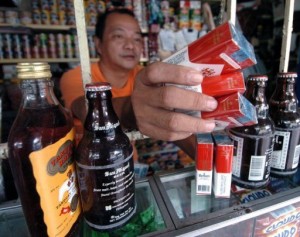 President Mohamed Morsy has agreed to amend laws pertaining to taxes on sales, income, real estate and duty stamps in an attempt to decrease the general budget deficit in compliance with the conditions of the IMF loan.

The decree imposed a 50 per cent tax on both local and imported cigarettes, in addition to two pounds per packet of local cigarettes and two and a half pounds per imported pack. The decree also imposes 25 per cent on imported and soft drinks.

Taxes imposed on spirits reached 150 per cent with EGP 15 per litre whether being local or imported, and a 200 per cent tax on alcoholic beer.

The amendments to stamp duty include credit facilities and loans. Moreover, the law divides the stamp duty imposed on advertisements into segments, and for the first time it includes obituaries and election campaigns.

The amendment also imposed a 90 piaster tax on all governmental clearances, and three pounds on licenses issued by administrative authorities. Taxes imposed on nightclubs, cinemas and theatres have been raised from EGP 300 to EGP 1,000 annually.

The decree included a three pound annual charge on water and electricity, and three piastres per kilowatt of electricity.

Real estate is to be taxed 10 per cent from the annual building rent, which is to come into effect by July 2013.

He told Daily News Egypt that the difference between a thug and a government, is that the former takes money from you to guarantee safety, but the latter gives you safety represented in “rights” and then robs them in the form of “taxes.”

Adly said that these decisions are not to shore up the general budget deficit, but to fulfil the agenda of the IMF.

“ Morsy has many ways to manage the general budget deficit, like closing all corruption files, reducing the budget of the ministry of interior, imposing taxes on products for the wealthy and on electricity for large-scale industries” said Adly.