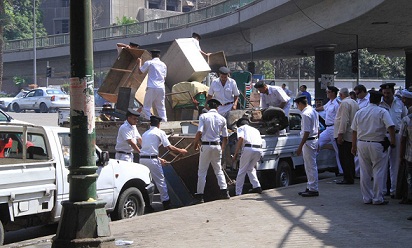 President Mohamed Morsy used his legislative powers to pass a law on Sunday, enacting stricter penalties against street vendors who violate the law.

Under the new law, numbered 105/2012, vendors can now be sentenced to six months imprisonment, be fined up to EGP 5,000 and have their goods confiscated.

The new measures in prison time and fines represent a significant jump from what had been implemented in the past.

Prior laws stipulate that vendors sell their goods in designated areas throughout Cairo. However, many street vendors operate unlicensed, often without repercussions.

Egypt’s informal economy stands as a valuable source of income to many citizens and accounts for anywhere between 20 and 50 per cent of the total economy.

Street vendors are often treated as undesirable by the government, who blames them for traffic and congestion problems, especially in downtown Cairo where they station their stands and carts in Tahrir Square and Tala’at Harb Street.

There were about five million street vendors in Egypt prior to the revolution, but that number has now jumped to six million according the Federation for Economic Development Associations (FEDA).