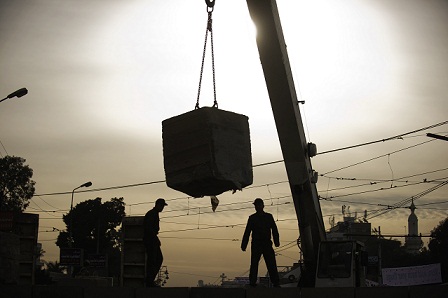 Those who oppose the president voiced their disappointment with the plan for the constitutional referendum to proceed as scheduled. Leader of the National Front for the Salvation of the Revolution Mohamed ElBaradei reacted to the declaration on his Twitter account. “We broke the barrier of fear: a constitution that aborts our rights and freedoms is a constitution that we will overthrow today before tomorrow,” he said. “Our strength is our will.”

Later on Sunday ElBaradei added, “our fight [regarding] the constitution isn’t about who is in power. It’s [about the] essence of [the] state, universal rights and values, and looking forwards, not backwards.”

The Popular Current released a statement on Sunday afternoon calling for the government to end the referendum on the draft constitution “immediately.”

“The Egyptian Popular Current boycotted the revolutionary and national forces, the so-called dialogue that took place yesterday for various reasons related to the nature of the dialogue,” said the statement.

The Popular Current cited the “language of threats, accusations and polarisations” employed by members of the Muslim Brotherhood as a reason for not going to the palace on Saturday for talks.

It also pointed to conspiracy theories of “toppling the regime” as a continuation of the same way of thinking by a group that “thinks they are able to monopolise the nation.”

The Popular Current also expressed disappointment with the failure of the president to meet their minimum demands, which included completely rescinding all powers of the first constitutional declaration and making way for a new Constituent Assembly.

It also held the president accountable for deaths around Tahrir Square in November and at the Presidential Palace last week.

“It is no longer possible to accept the status quo of the Muslim Brotherhood, which is not governed by law and not subject to the state, and even attempt to replace state institutions,” said the statement.

“The Popular Current calls to immediately stop the referendum on the draft constitution, as this is the only and last resort to overcome the current crisis.”

The Tagammu Party echoed similar sentiments in a statement calling the Constituent Assembly and constitution draft “illegitimate” and called on judges to boycott supervising the referendum.

The party blamed the president and his party for ignoring public opinion in an effort to establish a “totalitarian” state that seeks to violate religious freedoms and the independence of the judiciary.

In his column for independent newspaper Al-Watan, former liberal MP Amr Hamzawy included three points for his opposition to negotiations that took place at the palace. Firstly he demanded that the referendum be postponed and the timeframe for the process of ratifying a constitution, which many have claimed to be rushed, be reconsidered.

Secondly, he rejected the president’s approach in his address, which did not condemn the Muslim Brotherhood for the violence and deaths that took place.

Thirdly, he disapproved of the president’s failure to reconstruct the Constituent Assembly to make it more representative.

The 6 April Youth Movement (democratic front) spokesperson Mohamed Youssef said President Morsy’s stubbornness would lead him to the “same fate as Mubarak.” In a statement, Youssef said allowing the constitutional referendum to proceed as planned was in the interests of the Muslim Brotherhood.

He said 6 April rejected both constitutional declarations and would continue its sit-in, calling for the cancellation of the referendum and the reformation of the Constituent Assembly.

He added that there was still nothing done to bring justice to those who had died.

Al-Dostour Party announced its intention to continue marches to the presidential palace in Heliopolis, scheduled for Sunday afternoon, to voice opposition to the Constituent Assembly and the proposed constitution that is scheduled to be up for referendum on 15 December.

The Constituent Assembly, Al-Dostour Party claims, “resulted in a false constitution that only represents the ruling party.”