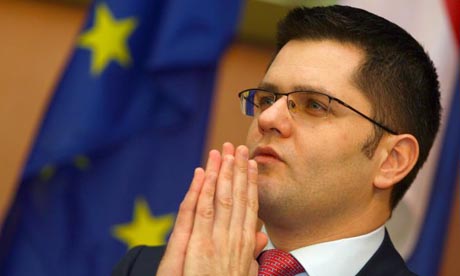 According to a statement released by the Ministry of Foreign Affairs Jeremić and Amr met on Saturday evening and discussed a number of topics including the UN Security Council, Palestinian statehood and the recently postponed conference on creating a weapons-free zone in the Middle East.

In the statement, a spokesperson for the ministry, Amr Roshdy, reported that during their meeting Amr informed Jeremić of “the importance Egypt attaches to the active role of the UN General Assembly… in keeping international peace and security… despite attempts by the Security Council to weaken the mandate of the assembly.”

The Security Council has been criticised over the Syrian crisis. As permanent members of the council, both China and Russia have used their vetoes to block resolutions that sanction the Syrian government. Criticism has most recently been expressed by Secretary General of the Arab League Nabil El-Araby and British Foreign Minister William Hague.

Amr and Jeremić also discussed efforts to reform the Security Council and to “expand the membership of the council.” The foreign minister stressed “Egypt’s commitment to the common African position in this regard and the need to lift the historical injustice, the reality of which is that the continent is the only geographical bloc not represented in the permanent membership of the council.”

Amr also thanked Jeremić for the General Assembly’s “efforts to facilitate the adoption of the decision to upgrade the status of Palestine in the UN to a non-member state.” He added that there will be “continued support for the UN’s efforts to help the Palestinian people and to achieve a two-state solution and end illegal Israeli actions, including the settlements and the siege of Gaza.”

The pair also discussed “Egyptian efforts to convene an international conference on a Middle East free of nuclear weapons and weapons of mass destruction.”Amr asserted that Egypt “maintains the need to hold the conference and rejects the arguments put forward to justify it not being held.” The conference was due to be held this year but was cancelled by the organisers (the UN, United States, Britain and Russia) because they felt that the states of the region had not come to an agreement on the terms of the conference. Both the foreign ministry and the Arab League pointed the finger at Israel, which was alleged to be uncooperative in the matter.