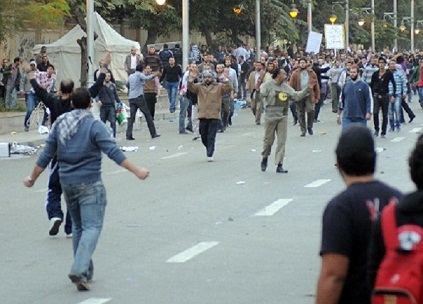 A group of four young men arrested in Zahra’a Al-Ma’adi and detained for several days, were released on bail Sunday afternoon.

Late Thursday night, nine young men were arrested near the headquarters of the Freedom and Justice Party in Zahra’ Al-Ma’adi. According to United Press International, angry protesters burned the front of the headquarters.

Mohamed Al-Rayes, a lawyer representing the detainees said it is very unusual when some people indicted with the same charges are released but not others.

Al-Rayes said that they were accused of damaging the party’s headquarters in Zahra’a Al-Ma’adi, with one of them of stealing a chair. Despite the release of all nine, the charges have not been dropped.

“The police are a party in any situation… these young men are from the area, seven of them are from Zahra’ Al-Ma’adi and they were picked up in front of a kiosk, not in front of the party’s headquarters,” Al-Rayes said. He added that they are accused of a misdemeanour, not a felony, meaning they should have been released earlier.

Fayrouz Omar, the mother of Abed, one of the four detainees who spent three nights in detention in the Tora Camp, said the group was standing by the headquarters of the party on Thursday night.

Omar said some of them were chanting peacefully in front of the headquarters, while others were just watching. Suddenly, a group of people from outside Zahra’ Al Ma’adi came and started vandalising the party’s headquarters, so the young men left and went to a kiosk 600 meters away.

“Security showed up, chased them and arrested them,” Omar said. “This is what everyone says, including eyewitnesses, people from the kiosk and even people from the party who said that these men were chanting but didn’t vandalise the party,” she added.

“Some of them have taped the events. If they’ve taped them, then how could they have taken part in them?” Al-Rayes said. Omar said, “it is obvious the decision is a political one, not a legal one.”

“Who will compensate me for the nights my son slept in detention with criminals?” she said. Al-Rayes said that he had negotiated with a police official to move them from Tora to the Ma’adi police department for precautionary detention. Al-Rayes said, “the man agreed and said that they are like his children,” but the official kept them in the camp.

Abed, 19, is a college freshman and frequently takes part in protests. “He is a positive young Egyptian…. he never threw Molotov cocktails… he insists on the peacefulness of the revolution, is this what he gets for insisting on that?” Omar added.

Omar said that there is no transparency from officials. “I feel that I’m part of a science fiction series, I ask about which hall in the prosecution he is, they don’t tell me. They claim that it is for security purposes. I ask where he will be taken, they don’t tell me,” she said. Omar called on Morsy to stick to his word and protect all peaceful protesters.

The Freedom and Justice Party is the political wing of the Muslim Brotherhood and has come under attack by protesters, over the past two weeks, across Egypt.